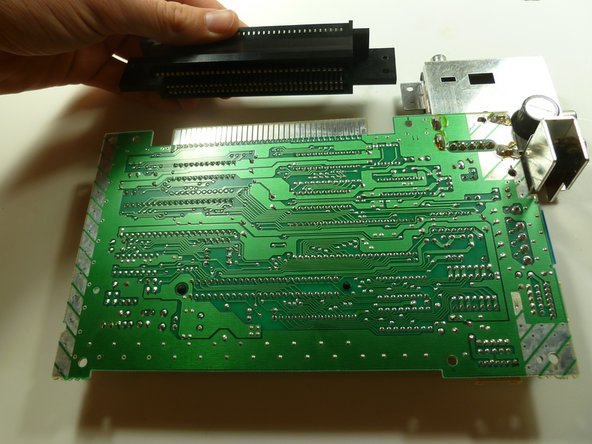 Because it wasn't terribly clear, the pin connector pulls off from the motherboard. Just pull straight away from the board to clear the connector. It takes some force to get it off.

And, no wires need to be disconnected either.

"How to replace your 72 pin connector"

Leaves out the steps that show how to remove the 72 pin connector.

Um are we missing the last steps on how to actually remove the 72pin connector???

I replaced mine, and I'm still getting a solid white screen. Any ideas what else it might be?

The 10NES Chip. Mr. Glitch's Retro Reviews: HOWTO: Fix the NES Red Light Of Death (mrglitchsreviews.blogspot.com) See this guide to learn how to disable it.

I replaced my 72 pin connector and now it seems the games wont eject all the way up, it stops at like a midway point. And taking the cartridge in and out is super tough! Any ideas guys?

To remove the 72 pin connector once unscrewed just wiggle it out. Replacement connectors are very tight to insert and pull out games (this is normal).

Don’t waste your money replacing the 72 pin connector. Refurbish it without removing it from the mother board. Stop after step 2. Use a dental pic to bend the top 36 pins. It’s tedious……but free. Be careful not to over-bend them, you can fix it but it’s a pain. Take some fine grain sandpaper and fold a piece over the blade of a putty knife and duct tape it on. Insert the sandpaper clad putty knife into the 72 pin connector (straight in, straight out, don’t slide left and right while it’s in there) Move one putty knife blade width left or right and repeat until you have cleaned all the pins. Use a game that has already had it’s connectors cleaned to test the machine before you put the rf shield and the cover back on. If you can’t get the game to play re-examine the straightness of the pins you bent and run the sandpaper putty knife through there again. After you get it to work, then put the rf shield and cover back on.

I would very strongly advise against using sandpaper inside any cartridge-based system as it can leave some sand residue in the connections, which would in term wear out the contacts on the games faster.

Also had problem with no picture on my Nintendo, replaced the reader, but still the same.