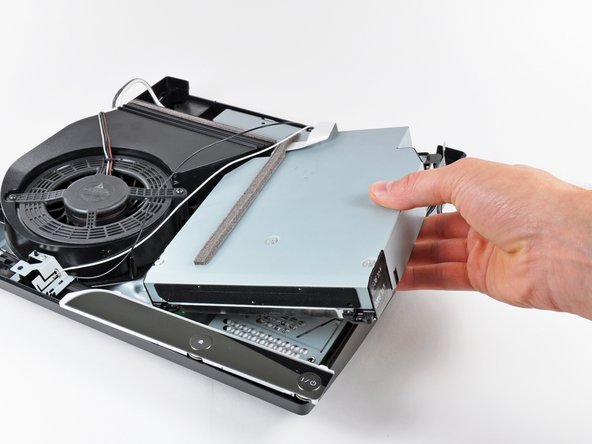 “If replacing the Blu-ray drive with a new drive, swap the circuit board from your old drive into the new drive.” Where can I find that instruction?

There’s now a link in the text of that step, which will take you to a video with detailed instructions for swapping the board.

Great video linked at the end to help with swapping out the circuit board, as well as the rest of the steps. Repair worked great, now we’re back in business for Blurays!

Thank you, thank you , thank you!!! Can get back to playing the original Dark Souls after snagging it for a 10 bucks :P

Sadly the replacement drive is typically $99… which is close to what a complete used system would cost if you bought it from someone :(

Checking in from 2021, I found a “Sony Refurbished” Blu-Ray Drive on Ebay for $45. Might be worth trying now?

i do need to replace the circuit board?

Great guide, I would highly recommend. Don't forget to do the swap of the circuit in the video or it will not work.

I am about to purchase a new drive. But the drive that looks exactly like mine is this one: https://www.amazon.com/gp/product/B00GVN... and this drive for sale doesn’t seem to have the “PCB”. I opened the PS3 and removed the drive; the one in this link I included. Doesn’t seem to have this large PCB, or is this one much smaller and also need replacement? I am ready to purchase, but I need clarification. Are there differences in technology between the PS3 Slim versions? The drive in your page here is the same shape, but not the same internals. The link I post here is just like mine. Please advise. Thx!

From the research I did on my PS3 Slim - CECH-25xx, YES it looks like different revisions have different disk drives. I would advise looking for one that specifically lists the “CECH-XXXX” number with the listing. That’s how I found my replacement drive on ebay. Best of luck!

Hello my ps3 blu ray drive was giving some probs in which i decided i wanted to buy a new drive to put in and when i did so i realized it wasn't working so i look on this web and saw that i had to switch the circuit board from the old one to the new and i still didn't a response can you help solve this problem???

I followed you instructions, which were great by the way, and when I turned the PS3 on and inserted a disc, it would not accept the disc. If I power off the machine and then try to insert the disc half way the console turns itself on but still will not pull in the disc. I bought this drive from eBay as a new item and says it is guaranteed to work and I did swap out the circuit boards. I also rechecked everything to make sure that all of the connections were tight and in as should be but still the drive is not pulling in the disc. ANY suggestions as to what is going on? Thank you

I would follow this troubleshooting guide above. This will help further identify the specific issue with your disk-drive. It may be that a sub-board component of the disk drive has failed - like the disk sensor.

I hope someone sees this lol. I did this and unfortunately pressed a little too hard on this orange looking cable. When I look it up to replace I can’t find it AT ALL. I even just looked up a ps3 diagram only to find nothing still. If anyone just knows what this stupid cable is called would be great. It’s orange, connects to the Blu-ray/disc drive, and seems to effect the whole cd thing, like it won’t even take the disc now. If anyone knows anything please email me at jamsinewood419@gmail.com

PS3 Slim - CECH 25xx - replacement Blu-Ray drive was listed as “Sony Refurbished” on Ebay. Worth the $45 and did NOT require controller board swap.

We lost the top screw to the PS3 optical drive do you need the screw?