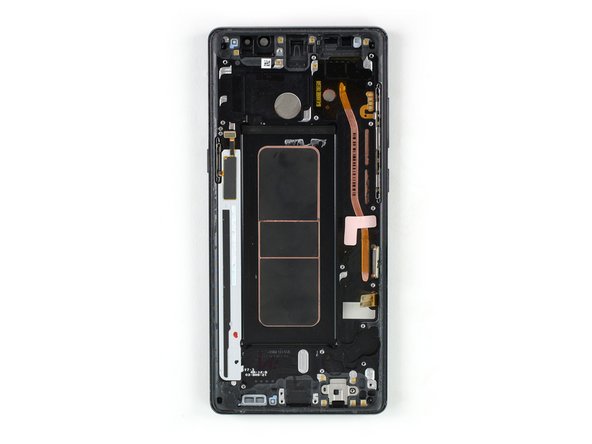 Use this guide to replace the display assembly including the frame of your Galaxy Note8.

This guide involves removing the rear glass cover; you will need replacement adhesive to reattach the back cover to the phone.

Opening the Samsung Galaxy Note8 will damage the waterproof seals on the device. If you do not replace the adhesive seals, your phone will function normally, but will lose its water resistance.

If possible, turn on your phone and test your repair before installing new adhesive and resealing the phone.

Follow these instructions in reverse order to reassemble your device. Apply new adhesive where necessary.

If possible, turn on your phone and test your repair before installing new adhesive and resealing the phone.

Follow these instructions in reverse order to reassemble your device. Apply new adhesive where necessary.

Very excellent guide. Great pictures. Pictures must have been done in some sorta studio setting or edited for only what is needed for the illustration of every step. This was my first attempt at self repair on a cellphone, but I’m no slouch. I repair and refurbish all sorts of electromechanical devices and was once employed to do brain surgery on massive water cooled mainframe computers. Some of the same rules apply; have proven procedures, follow instructions, control your work space, and invest in the best tools. Since this was my first, I was not in a hurry. It took me all of 6 hours, but I was meticulous, repeated many steps to increase my confidence, and had all the time needed to do what I needed to do. Grateful for no longer being a slave to phone repair/insurance scams!! DIY forever!

Thanks for the great guide. Unfortunately, ifixit does not stock Note 8 parts in Australia. When I went to purchase the display assembly with frame from a parts supplier, they refused to sell me the part as they said that a number of customers have experienced the LCD not working on the new assembly after repairing their phone. The wholesaler would not honour the warranty as all screens are tested before dispatch, therefore, the LCD must have been damaged in the repair process. I could understand if the repair included installing a new screen into an existing frame but because all parts are being transferred into the new assembly and the parts available for sale all come with adhesive, is there any step where it is likely that the LCD could be damaged even if extremely careful?