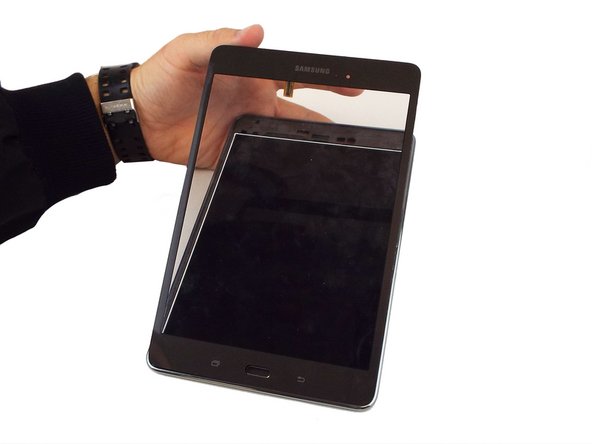 A touchscreen that is broken or damaged can prevent access to applications on a device, which can make the device useless. This guide highlights how to remove the back cover and front cover of the tablet in order to get to the touchscreen as a means to replace it.

These steps worked well but you must use a metal spudger to get this started. I didn't have one and it was a nightmare. I finished the project but it was very difficult to start. I would also use a heat gun to loosen the glue for the bottom and top. Just my opinion from my experience.

See comments on the last step re: avoiding the area of the flex connector, and using heat, as the previous commenter suggested, throughout the removal process to loosen the adhesive and avoid breaking the glass.

Also, the “metal" frame around the digitizer is very susceptible to being dented. Be very careful of it.

Finally, a piece of advice from other iFixit commenters about cleaning the LCD before adding new glass: careful circular motions with a very clean, dry microfiber cloth are sufficient in most cases. If not, a small amount of water can be added to the cloth. Avoid adding alcohol or water directly to the LCD, as it is easily smudged.

^This! An iOpener or heat is a MUST when separating the digitizer and LCD. There is no way the digitizer just pops off. This is especially important if the digitizer is cracked and spider-webbed.

Oops--one final suggestion, also from other iFixit commenters (I can't find the original, or I’d reference it. It's in the Q&A section, answering a question about jumpy digitizer responses after screen replacement.)

The first time I did this, all seemed well until I tried to use the digitizer, when its response to touch was suddenly very jumpy and erratic in all areas of the screen. The next time I followed Ifixit advice and covered all metallic-looking areas of the back of the new screen with thin Kapton tape, and had no problems. I essentially made a thin frame of Kapton all the way around the non-transparent areas of the screen.

There have been various suggestions about why this might work, most speculating on small electrical shorts occurring between these metallic areas and the metal parts of the frame surrounding the LCD. I just know that it's quick and easy and seems to work.

Hi Bonnie, would you happen to know what thickness of tape that should be? I’m getting little to no response then when I put the back on i’m getting nothing at all.