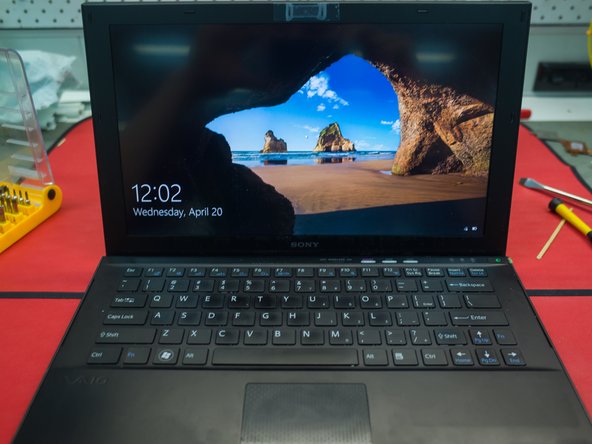 This dissasembly guide was made in the process of changing out a faulty fan unit. To access this fan the motherboard needs to be removed, as well as most other parts of the laptop. If you need to repair or replace the keyboard, this guide should get you most of the way there.

I had initially changed the fan out, but not put the thermal paste on the CPU correctly. This resulted in high fan speeds, as the laptop was compensating for the poor heat dispersion.

Before you start this project, I would suggest reading this whole guide through. Understanding what things look like on the inside will make it much easier to take the laptop apart.

Hi- How difficult is it to replace the lcd? can i just unclip the bezel or would i need to take it off the hinges and follow this guide?

I think you need to take the case off, then take the lcd off. I haven't done it on the z2, but I did do it on the z1.

Thanks for the response, i cant for the life of me find a guide anywhere for the Z2. Was the bezel clipped on or glued on for the Z1?

any support would be hugely appreciated :)

Sorry to be pain, can i detach and re-attach the main motherboard cable for the right hinge without taking the motherboard off? Also are the there any cables from the left hinge i need to be aware of?

The Z2 was put together quite differently - a lot less room inside than the Z1. The screen on the Z1 was clipped on around the outside. Fairly intuitive to remove it as long as you go slow and be cautious.

It's be a while since I wrote this, but from memory the Z2's display should detach via plugs near the hinge-end of the motherboard. I wouldn't expect that you'll need to take the motherboard out.

The silver strip at the bottom of the LCD also covers some cables related to the antenna (which goes around the outside edge of the display.

Just a thought - if you do take yours apart, take some pictures and make a guide on ifixit. The Z2 was really well built, and it is great to be able to keep them serviceable.

I performed all the operations and laptop works but it does not see the battery now. Any guesses where I could made a mistake (may be disconnect smth).

Hi- did you get to the bottom of the no battery detection issue? Im getting the same after taking the laptop apart

Quick update- ive managed to fix it (Opened it back up). Seems like i put too much pressure when screwing back the motherboard. Just had to loosen some screws.Hope this helps if you are still having issues.

Thank you very much. Great guide!

What is the thickness of the thermal pad on intel’s PCH (south bridge)? Is it 0.5 mm or more?