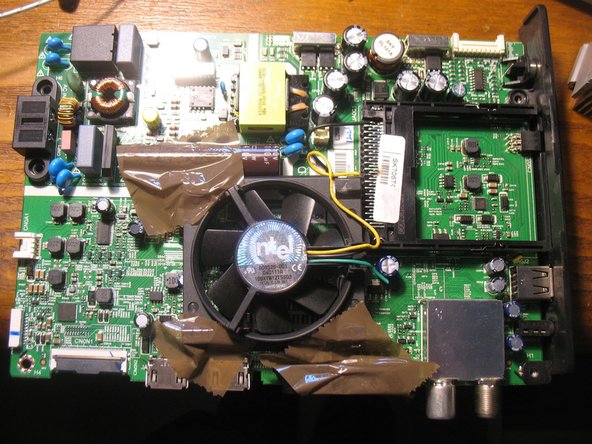 My Strong SRT 32HY4003 LED TV did always shut off after some minutes of operation. It went into Standby, could mostly be switched on again more ore less instantly, but same happened again, but power-on time got shorter and shorter each time. Searching the web I found several similar problems with this device, but no solution but changing the mainboard. Also I could not get a schematic for the mainboard 6M34G-01H32E200-S1.

Anyway, after opening the housing I found, that without rear cover, TV worked remarkably longer (>1 hour), before switching off again finally. So I assumed it was a thermal problem indeed. I finally succeeded with simply adding an old CPU fan.

WARNING: THE MAIN BOARD HAS A HOT SECTION WITH 230V AC WHEN CONNECTED - DO NOT TOUCH THIS SECTION WHEN POWER CABLE IS PLUGGED IN!!!

To re-assemble your device, follow the steps above in reverse order.

To re-assemble your device, follow the steps above in reverse order.