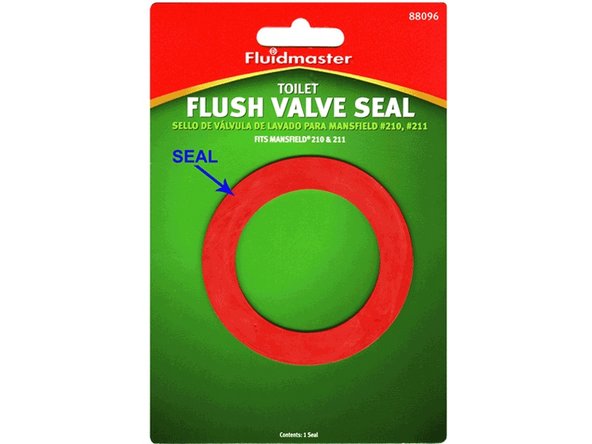 However, the shortcut method may also be applied to many other brands of toilet flush valves.

This is a shortcut, time/labor-saving, method of installing a replacement "flush valve seal" to stop water inside the toilet tank from seeping/leaking down the drain (and the continuous, annoying sound that accompanies this water loss).

Flush Valve Seals will need to be replaced, at least, once every few years, depending on water condition. Other kinds of toilet water tanks may have similar assemblies. Why call a plumber for something so easy to do yourself?!

Flush Valve Seals will need to be replaced, at least, once every few years, depending on water condition. Other kinds of toilet water tanks may have similar assemblies. Why call a plumber for something so easy to do yourself?!

I followed the instructions on the package (turn off water, disassemble the flush valve).

It was so simple, I think this "shortcut" would have been more difficult.

You "think" it would have been more difficult? No disassembly (and reassembly) required on this one.

I just followed this instruction and it was fixed in less than 2 minutes.

After replacing seal, mine toilet is still leaking. :-(

Nina, most replacement gaskets leak. Try fluid master if you can find one but most of this stuff from China or Mexico and the manufacturing is faulty. See my other comment.

1. Sometimes there are mineral deposits (from 'hard' water) on the surfaces the gasket resides between (for instance, around the bottom of the float tube that sinks down onto the top of the seal). You can try carefully sanding them off with fine sandpaper.

2. If you have very cold water, especially, in winter months, a seal will be tested! Look for a new seal that is shiny on its surface. This indicates it may be silicone-based (not rubber) and they work better in areas with very cold water.

3. When installed normally, distortion of the seal is not a problem. You may just need to reinstall to make sure everything goes smoothly. But, first, gently pull the seal on opposite sides, with both hands. Do this moving around the seal to be sure it is properly seated in place. If nothing else woks, time to call a professional : )

I can’t pull the flexible water tube out… help!

Never apply too much force. Perhaps it is originally molded-in. Try disconnecting the same water tube from the other end?

Is there a video available?

The water tank that gets rid of waste from the toilet does a good job but is rather bulky. Luckily, with technology development, manufacturers have discovered how to deal with the bulkiness of the tanks. You, as a buyer, may want to know if the innovations are appropriate for residential use and if you should have tankless toilet vs tank toilet.