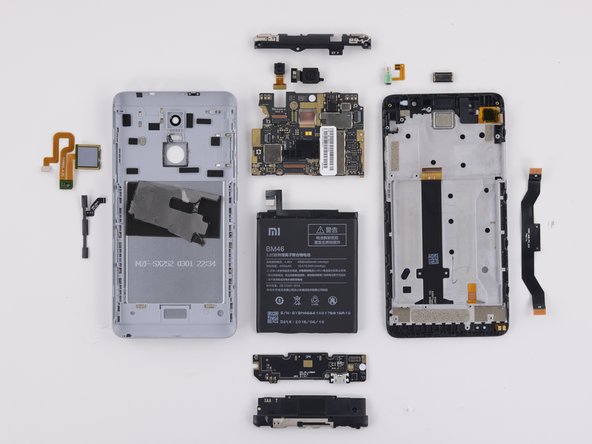 The Xiaomi Redmi Note 3 is an easy to open phone that has an easy to remove battery. Almost reaching repairablity perfection, the phone falls short at 8 out of 10 due to its difficult to replace display.

Thanks for this guide. Almost Identical to a Galaxy Note 3 screen replacement. A lot easier than I though it would be.

Thank you so much for posting this teardown!

My Redmi Note 3 Pro developed a charging problem, and this post gave me the basics I needed to replace the usb daughterboard.

I hoped it was a short circuit or fault in the usb port, which I learned here was replaceable. So I ordered the part on eBay and replaced it myself at home. All up it cost me $11 to fix my phone, and it is now working as normal again.

I'd like to add that one of the screws holding the speaker assembly is hidden under a tiny sticker, and the assembly and usb daughterboard are both also held in place by glue or double sided tape. Lift carefully and they come off quite easily.

Where did you buy the usb charging port board (daughterboard)? I have the exact same problem, except the turning off of charging on devices only happens when I bend the charger down slightly. Do you have any problems with mobile data/ calling/wifi and or bluetooth?

I have a problem with my xiaomi redmi 3 pro, first, my wifi and my bluetooth can't activated, then now my device can't read my SIM card.. What should i do?:(

Hey,I was replacing my charging port and forgot to remove the sd card/sim card slot before opening the case.

I didnt open it all the way,but now my sd card wont load and not just the one I had in when it happened,but any I put in.

What can I do?