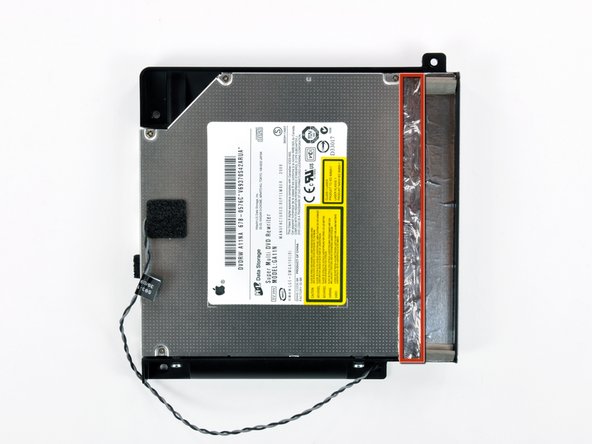 iMac won't read disks? Use this guide to replace a non-functional optical drive.

A word of caution when reassembling. Be sure to replace the LCD thermal sensor connector and the optical drive thermal sensor connector with the contacts facing down. They are both very small and easy to overlook the contact points. If either or both are reinstalled wrong the iMac will not power up. You will get a white screen momentarily and then it will go black. I made that mistake and had to go back in and correctly insert them which solved the power up problem.

I successfully put an SSD (mounted in OWC data doubler) into the optical drive slot.

I got slightly thrown for a moment that at step 10, the iMac was apparently rotated 180 degrees. I didn't really want to change my work position, so I turned my iPad upside down to follow the pictures correctly. Not sure why the perspective changed at that point in the manual.

The other "interesting" task was reattaching the LCD, what with the nearby rare earth magnets trying to steal the screws. Having a heavily magnetized torx screwdriver was a big help; I just took a magnet of my own and stuck it on the handle end of the shaft, and then it held the screw enough to make the job possible.

I was quite relieved when my iMac booted after all this. :)