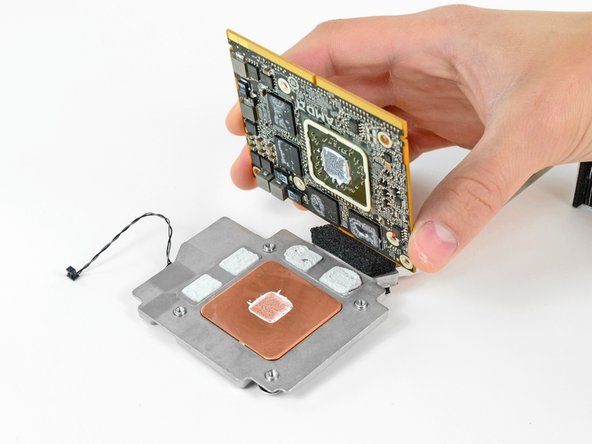 Use this guide to install a new GPU card.

hi! please tell me what type of grafic card is usen in i macs? i know AGP PCI standars but i t is not them

Hi all, I'm new to computer repair, basically I just want to save my mac. It appears that the graphics card has gone out (it's about 5 yrs. old). Where can I find a good replacement and what would be an appropriate price range? Also, do you have any additional tips for physically replacing it. How can I tell if I need the whole piece or just a section of it? I have seen prices range from $4.00 - $500.00.

Did you ever get a response to your graphics card question; I would like to know as well?

Hi There, mine is a late 2011 model iMac desktop and I'm having trouble with the display screen. It's coming up with pink and yellow vertical strips. The tech says it could be graphics card. The online spec for my late 2011 model iMac suggests it is - (AMD Radeon HD 6750M graphics processor with 512MB of GDDR5 memory). Can you please tell me if that's right. Thank You.

Hi! Can you insert a different graphics card? A nvidia mounted in the retina macbook? Something more than the 512 mb of the series card. Thank you.

I combined this tutorial with the “baking the GPU” steps in this video to fix the yellow/pink vertical bars issue: https://m.youtube.com/watch?v=nB172HJeM0...

Yes, sticking the GPU in a 395 degree F oven for 8 minutes worked!

I did the exact same thing and worked for me too, I can’t believe it!

Fantastic instruction and pictures. Screw sizes are a big help, even when I used a muffin tin to keep them straight. One thing that caused problems was forgetting to leave all of the cables loose as I put the logic board back in. I had to undo a couple of times because I trapped a connector under it. Ideally there would also be separate steps for re-assembly instead of just going backwards. But that’s a lot of extra work. Great job, team!

Great guide! Thanks so much for taking the time to put it together.

Thank you for the guide. I too used it to pull the GPU card from a 21.5-inch 2011 iMac and bake it in the oven at 385 F for 8 minutes. The solder reflowed and the card works again.

Great tutorial, I just replaced the GPU of my wife’s late 2009 21.5” iMac with it (found a new one for 30$ on ebay). Some screws and connectors on the logic board have different positions than in this instruction (which is for a 2011 model), but it was still very helpful! Just a hint: I also replaced the PRAM battery (that you see in step 32) while I was at it.

After doing the whole thing and trying to turn on it didnt…..it gives 3 beeps or tons or sound, stops and then starts over again with tons and keep going

Hello, please, what would be the right thickness for GPU thermalpads. In my case, it will need to be replaced, but I don't know what the correct thickness is.

used this guide to re-paste the GPU as well as CPU to prevent it dying from heat as a precautionary measure. THANK YOU! P.S. i used K5-Pro to replace the gpu pad paste, thermal acrtic silver for both gpu and cpu chips

Hi Thanks for , step by step images for mac upgrade.