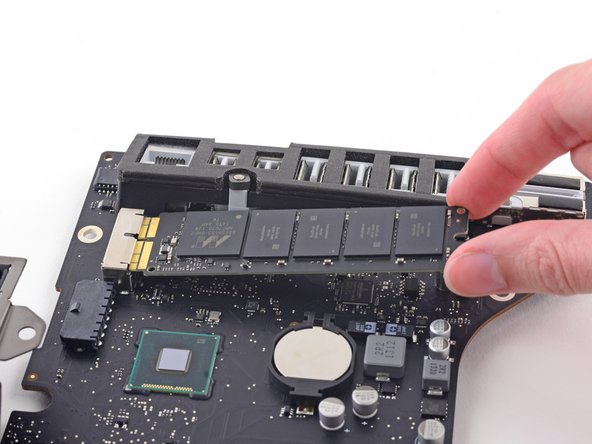 Use this guide to replace the Apple custom blade SSD (NVMe/PCIe x4).

This guide is intended for iMac Intel 21.5" EMC 2545 models that are equipped with an SSD (Fusion Drive or blade SSD configurations).

If your system does not already have a blade SSD installed you won’t be able to install it later as the connector and the support components are not present on the logic board.

Many thanks for the tutorial? Very detailed and helpful. Now, my question is, can I replace the existing SSD PCIe blade by ANY PCIe blade?

Apple uses a different interface than the M.2 blades as such you ned to use theirs or either of the two 3rd party drive makers OWC or Transcend

Hello Dan! Many thanks for your answer, but none of the webpages you mention has a blade PCIe SSD compatible with the iMac 4K 2017… :(

I’ve put in few of the BeetsTech blades in with no issues. Are you trying to install the SATA drive?

Hi Dan! The initial intention was to replace the current 28GB blade PCIe SSD by a bigger one, 225 or 500GB, and keep the current sATA 1TB drive. This way, I could have a decent and fast FusionDrive, as the current configuration is pretty slow…

Finally, I’ve decided to replace the current 1TB sATA 5400rpm drive by a 1TB sATA SSD, as the total cost is arround the same as replacing the blade PCIe drive. In adittion, I am not 100% sure which blade PCIe drive will work on my iMac… the support guys from OWC say that they don’t have a compatible drive yet :(