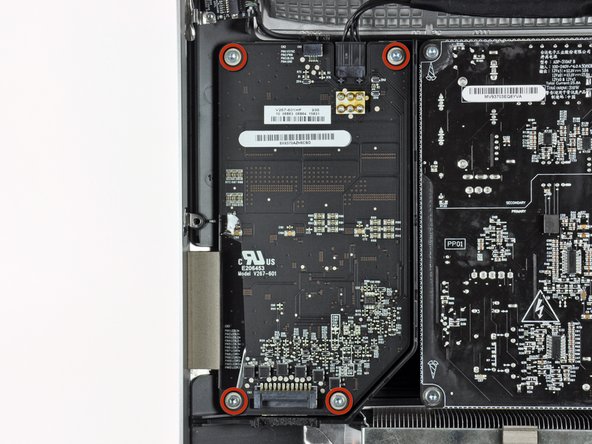 Backlight not working? Use this guide to replace a broken LED driver board.

I took a ton of time taking the screen off since this was the first time I've opened up my iMac - the connections are fragile, but once you know where they are and how they connect, it's quite simple. I found that my inverter board and power supply had been corroded by moisture - a couple years right next to an AC unit were suspect, I guess. My screen is at full brightness and I've had no issue so far! Thanks, ifixit!

Thank you so much for posting these steps. I have a question regarding my iMac led board replacement. How to make sure of the exact type/model of LED driver board I need for my iMac? And what would be a good and reasonable place I may purchase it from?

Great guide, swapped the board without issue. Unfortunately didn't solve the problem, screen still goes black if brightness over 1/3 of full.

My iMac has a dark left side of the screen, I tried the fiddle with the left corner connector trick but that did nothing. I noticed the user had the display set to full brightness to get a useable image on the screen, this issue may have caused the Power Supply failure not sure, the cheaper easier fix would be to replace this board, but I don't want to replace the board if that is not the issue. For folks who had a bad board was the screen not working at all or did you get a half lighted screen like I mentioned above? Thank You

Wow- that was so easy a repair! Time will tell if the “new” board is up to the task but everything is working great right now. Thank you so much for this excellent tutorial! I would be buying a new Mac now if I hadn’t have been for your excellent advice!!!