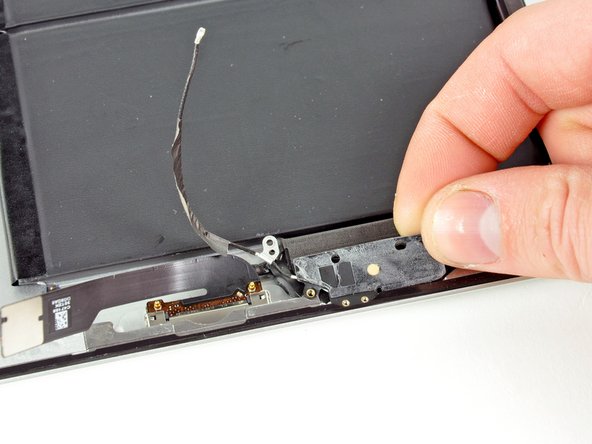 Use this guide to replace a broken antenna.

To reassemble your device, follow these directions in reverse and use our iPad 2 Wi-Fi EMC 2560 Front Panel Adhesive strips guide to reattach the front panel.

To reassemble your device, follow these directions in reverse and use our iPad 2 Wi-Fi EMC 2560 Front Panel Adhesive strips guide to reattach the front panel.

I’ve seen other guides that avoid having to remove the entire logic board by just popping the metal shield over the WiFi board on the bottom part of the logic board then popping out the WiFi board with the antenna cable attached. I assume there’s some good reason for not using this approach? Is there some risk of damaging the WiFi board? It’s just a press fit into the base of the logic board and there’s sufficient clearance to thread the antenna cable up from the bottom and out thru the space where the WiFi board goes. The metal shield can be pried off and pushed back on without damaging it, and the WiFi board can be eased up from it’s socket with the tip of an exacto knife blade. Removing the entire logic requires that it be re-seated so the metal contacts at each end mate and requires an adhesive to hold it in place. What’s wrong with this alternative?