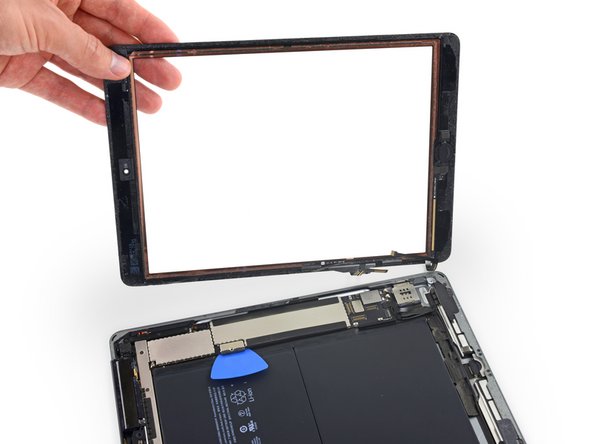 Use this guide to replace the front glass and digitizer assembly on an iPad 5 LTE.

I was able to complete this repair although the screen on the iPad that I was trying to repair was completely shattered and I ended up having to just take it out in chunks. A little more detail about best practices in that situation would be good. I also am having some issues with the home button not being quiet right after the repair and now that I am seeing that I would have purchased a replacement for the adhesive holder piece when I got the screen. It is working fine for now and I plan to just be careful with it so I don’t have to pull the display again and risk messing up the screen adhesive and having to order another set of that again too.

I agree, it seems most repair instructions tend to be ‘only’ with intact glass! A non-intact glass can cause a series of other problems. This as some others seems to be an incomplete page. Sorry love your site, but keeps repeating.

It didn´t work for me. I did this repair 2 times.

At the first try, the front glass was not totaly fixed, so I I used 10 strong clamps to get a better connection, but the glass was not really fixed and broke again with a new one.

So I tried twice. I cleaned everything very well, waited half an hour before I put the glass on the ipad. I put it on a flat surface on top with some haevy gear for 24 hours. After only some days the glass lost connection at the right down side where the cables are. So the display got a crack again.

I asked ifixit to fix this.

They told me: This is my fault.

Most likely you did not route the display cables down into between the housing and the lcd this is tricky if done right and the chassie is not bent and no debre is left the screen should adhear no problem. I have done many of these with no issues.