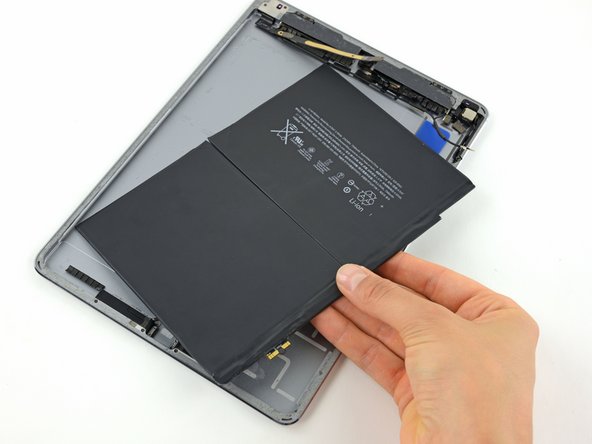 Please provide the link Or Source to Buy the Original Battery. Thanks

Can ipad air 2 battery be used for ipad air 1?

When you are replacing the screen, do you need a sticky pad to fix the screen in place ? If you where can I purchase? I don’t see anything mentioned about replacement for existing screen on iPad Air 2.

If you’re using the iFixit kit, it comes with replacement adhesive for the screen. If not, you’ll need to get either pre-cut adhesive strips (recommended) or use some strong double-sided adhesive tape like Tesa 61395.

And how does the new battery get stuck back in? Just spread adhesive around or something?

Does the repair pack come with adhesive?

Long story short I wasn’t able to open my iPad using iOpener. Tried really hard, even too hard and scratched the metal surface a bit. It would not move. Then I spent $20 dollars on a heat gun. That was the key. Frankly I cannot imagine how anyone could do it with iOpener. Even if you managed to open the iPad then it still has many steps where heat gun was life saver. Esp. the final boss - battery.

Changed the batter, re-assembled in something like 30 mins. Before closing I tried to turn the iPad on. It worked! Added adhesive and hopefully closed it forever.

I used a hairdryer because the iOpener didn‘t worked. But after the replacement and functional tests I plugged in the power supply over night. Nothing happens even though the battery icon changed to loading battery icon. Can you give me a tip what could be defect? Thanks.

I have this issues too. Be great to get a little help.

I do not user the opener tool, I have my own heating pad. However, the instructions are accurate. There is a faster way to do this, but you have to delicate.

Does it work with LTE version

I always use goo gone on my credit card. I Apple some goo gone to a paper towel and rub a small amount on the edge I am wedging under the battery. Reapply every time you take out the card. Clean the case with rubbing alcohol to remove any oil after the battery is removed.

Did this repair but the battery won’t charge. The green battery icon shows up but the percentage of charge goes down. Brand new battery.

Installed a new ifixit battery. while it is slightly smaller than the original the “taped side” made it difficult to place so that the logic board could be put back. Just takes a bit of work.

I also think “just do the reverse” when this is so compact, perhaps some instructions or a list would help.

Thanks for the person who put this together! It is a good guide to take apart the iPad Air 2