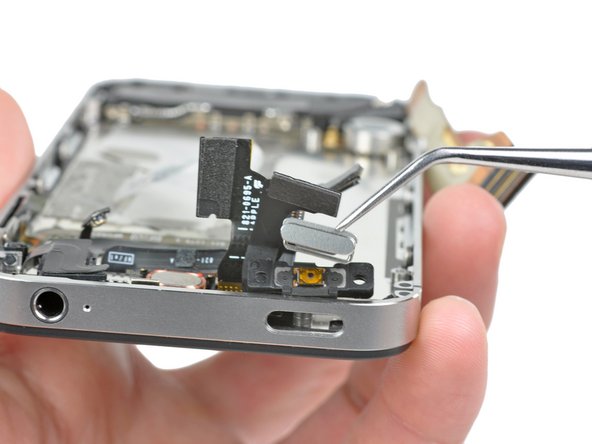 where does the little rubber piece go? on power button or bracket?

If you look at the Logic Board, the top kind of looks like steps. Find the tallest point, the go left and down one step. The piece goes at the top of this. The thinner part should face towards the back of the phone. It is to protect the LCD cable.

Hello! New to this comment section and love it compared to the YouTube videos that always seem to have the wrong phone... I have a Verizon CDMA iPhone 4 (not 4s). I'm having a problem with the power button. I have changed the ribbon and the button still won't click. I have checked the ribbon button with a pointed screwdriver and it clicks like it should. For example, if I did not put the metal/physical button back into the phone, it would see that I could just poke something inside to turn on and off. Is there a "spring" to the physical button? Do I have something missing? The button seems as it is in the diagrams and I wonder if the wire on the bottom of the button is supposed to provide a springing of some sort...to allow for it to "stay tall" and away from the bubble button on the ribbon. Then when the physical button is pushed it will go down and activate or push the ribbon button, and then click or spring back up. Am I missing something here? Tks GANDL2123@gmail.com

If someone tells you or you figure it out,can you tell me at dima_fedorov@yahoo.com,or just reply on this.

"the outward edges should be on top"... what? I have the iphone 4 Verizon and I've followed the instructions to the letter. I have installed the power button with the metal wire thing down towards the screen...the button slides in nicely and I have replaced the new ribbon cable with the copper button on it new and when I test the copper button on the cable itself it does click...but when installed I can't get the button to spring in and out and click like it is supposed to. What am I doing wrong...? Tks to gandL2123@gmail.com. Augusta, GA