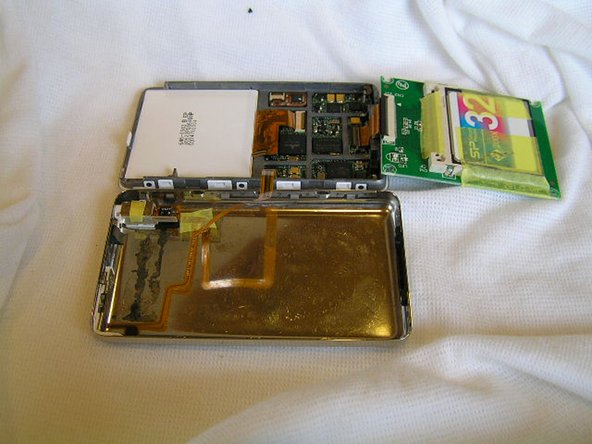 This Guide will show you how to replace the 1.8 HDD with a CF or SDHC/SDXC memory card. This might be useful to many people because a 1.8 HDD is hard to find and expensive. However, a decent CF card is almost as expensive and hard to find as a 1.8 HDD. The cheapest way to replace an iPod HDD is probably to use a SDHC/SDXC card.

I bought this CF to SD converter http://www.amazon.com/gp/product/B000YZG...

and it won't fit in a 30gb model.. just FYI for people who were thinking about doing this install with an SD converter. I might still look for another one, but might wait till CF goes down in price.. or for the ice age.

@tony - had the same problem initially - then realised that you can dismantle the SD to CF adapter to make it much thinner. See this video for instructions: http://vimeo.com/30075882

Used a 64gb Sandisk Micro SD (in a regular SD adapter), and it restored through iTunes no problem

I’m used the same 64gb card,but it did not work.The ipod still in the Apple logo.Could you give me some ideals,thank you.

1. I had an 80gb 5th gen ipod classic. i upgraded my ipod to a 128gb SD which worked without issue (i’m not sure what the limitations are but my ipod came up saying it was a 128gb ipod).

2. I used the following parts: