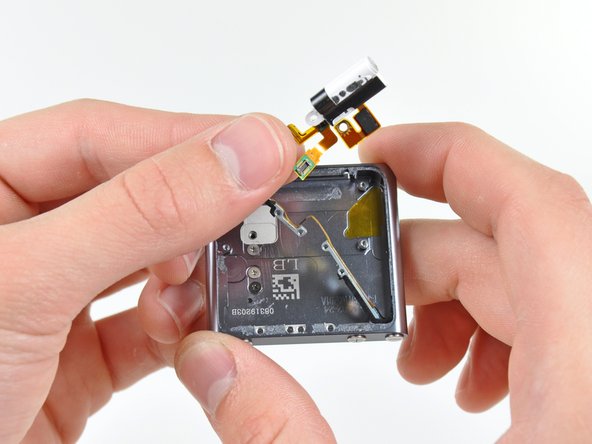 Be aware, When replacing the on/off button, it is extremely difficult to get the rubber mould to fit correctly behind the power button. It will in all likelihood take you a good few times before the power button works properly, so make sure you test it first before reassembling!

My problem was that there was a small plastic bit missing from the on/off-switch. I just glued it back on and now the device works again.

Here is a picture of the plastic bit and the switch where it belongs to:

And here is a video that helped me to find the issue:

if your problem is that your player is pausing randomly - maybe just try using some WD-40 or similar to clean the contacts will fix that. you can just spray some WD-40 into the headphone-jack without dismantling it.

don't use to much WD-40, and hold your player with the headphone-jack pointing down. otherwise it may happen that the display gets damaged(happend to me - my display now discoloroud because of the liquid / but is functional anyway).

maybe just try using some ~~WD-40 or similar to clean the contacts will fix that. you can just spray some WD-40 into the headphone-jack

..that's because WD-40 is not supposed to be used to clean contact points on electronics. If you already damaged your own device why on earth would you tell someone to ruin their own?

Don't ever use WD-40 to clean any electronic device especially the audio contact points in the headphone jack.

There is plenty of audio contact cleaner available for electronics that is safe for your device to clean and lubricate the jack. I prefer Caig Deoxit for audio contacts particularly as they specialize in a number of contact restoring solutions for everything electronic whether it be mechanical metal structure or plastic surface circuits. www.deoxit.com

I thank you guys so much. Especially the Tips from Dave and Mart Kroon!

This tiny plastic piece is in my opinion a deliberate bad choice for it's function, it can very easily fall out of place and leave a completely functional device useless.

I simply glued it back on with some standard glue which i aplied with the cut-of end of an q-tip. Be sure to use only a tiny amount, since the button can get glued tight and is not movable anymore.

During the disassembly, the plastic piece from my "Decrease-Volume" Button got lost, so i replaced it with a tiny piece of plastic i cut of the q-tip. Be careful not to make it to big. If it is to big and already glued on, you can leave away some or all of the 4 screws holding the buttons in place and just put a piece of plastic between the battery and the cable so the buttons stay in place but can get pressed further in.