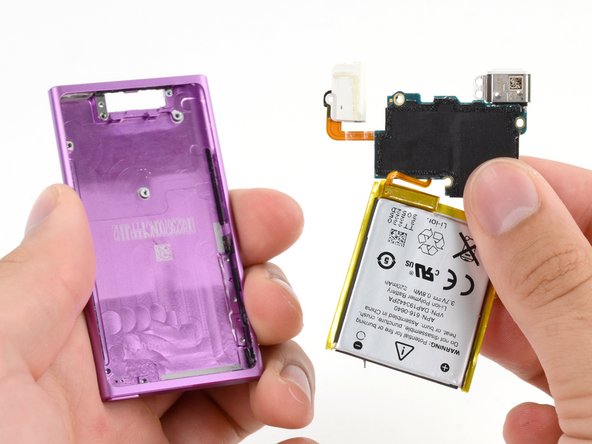 The 7th Generation iPod Nano has quite a few components soldered directly to the logic board, this assembly contains: the battery, headphone jack, sleep/power button, volume control button assembly, and Lightning connector. Use this guide to remove or replace the entire unit in your Nano.

hi is it possible to replace the battery or is it soldered in?

its soldered in but you can replace it with some prior knowledge of soldering, i’m planning on doing it this weekend actually!

Will this fix a headphone jack that doesn't work?

Fixing the headphone jack is super hard. I've been working on mine for a few months. And Basically I ordered the part on ebay (headphone jack, the power button is attached) and I pulled it apart, opened the ipod and swapped everything out (pay close attention to where pieces go cause there's no YouTube videos on how to do it yet) but there is a small piece attached to the ribbon cable near the headphone jack (it's square shaped, with looks like little grid thing, not sure the name) and it has to be perfectly lined up and contacts have to be touching for the power button, volume controls, an headphone jack to work. And that's where I'm stuck cause you can't use adhesive or it will block the contact points. So if you can find someone to replace your ipod parts it will be much easier.

There are 4 screws that miraculously disappear between steps 24 and 25?