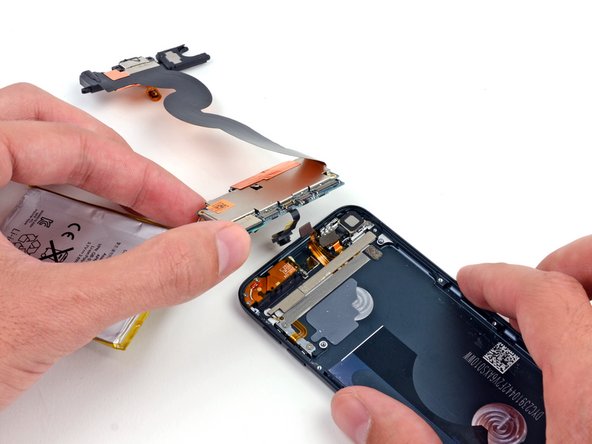 In the iPod Touch 5th Generation, the logic board, battery, front-facing camera, Lightning connector, speaker, headphone jack, and home button are soldered together into a single unit. Use this guide to remove the entire assembly.

Step 33: If you replace the logic board you will necessarily need to desolder and resolder the battery and Lighting Connector cable. A new logic board will not come with these two items attached. See Old Turkey's reply to my question on this subject...

Is the logic board assembly available for purchase on this site? This part would include the logic board, possibly the attena, the dock port assembly, the speaker, the home button, and the battery.

It would be nice if a link to a replacement iPod Touch 5th Generation logic board assembly were included, or suggested services where existing iPod Touch 5's logic boards can be repaired. I've seen nothing but dead links online and the only ones that work point towards the iPod Touch 4th generations, or to this digital manual.