Grab a toolkit for your iPhone 7 A1778 model and fix your broken phone! 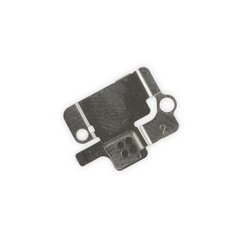 This metal bracket secures the camera flash to the rear case.

Externally, the Apple iPhone 7 is very similar to its predecessor. Other than a smoother look and a change in antenna band placement, not much has changed. However internally this phone is full of aggressive breaks from convention. Everything inside the new iPhone’s casing is a statement about the future of this phone. The home button is no longer a physical button, but rather full of pressure sensors and haptic vibration motors that simulate the feel of a button. The new A10 Fusion processor blends two high power cores that rival laptop performance along with two low power cores that combine with a much larger capacity battery to extend lifetime by up to two hours. This generation of iPhone has also seen the headphone jack removed, and in its place, new stereo speakers.

iPhone 7 Model A1778 has a very similar cellular connectivity as the A1660, except that there is no support for TD-SCDMA and CDMA EV-DO Rev. A bands. Therefore, the phone won’t work properly on CDMA networks like Sprint or Verizon although you still can make phone calls via Voice-over-LTE (VoLTE). In the US, you can purchase the version at T-Mobile and AT&T. This can also be found in many European and Asian countries like the UK, France, Germany, Denmark, Greece, Italy, Spain, Singapore, and Australia.

The most commonly needed repair for the iPhone 7 are cracked screens and dead battery replacements. iFixit has the best iPhone 7 screens and iPhone 7 batteries on the market, along with a complete catalog of various other iPhone 7 parts for the less common repairs.

All iPhone 7 repairs will require a Pentalobe P2 screwdriver and Tripoint screwdriver in addition to standard precision electronics tools. Any repair that removes the battery from the chassis will require replacement adhesive strips. New to iPhone repairs is the iPhone 7 display assembly adhesive, that will need to be purchased for any repair that removes the front screen. Since the iPhone 7 is water resistant, a new screen adhesive will be required in order to retain its resistance to water damage. All iFixit Fix Kits come with all tools and replacement adhesive needed to complete your desired repair.

Once all parts and tools have been acquired, head to iFixit’s iPhone 7 repair guides for step-by-step instructions on how to make the fix.

The iPhone 7 earned a 7 out of 10 in iFixit’s repairability assessment. Watch the Teardown Review for more: