How to replace your iPhone 5 battery

My iPhone was acting strangley, where it would report being at sixty-something percent battery then just die thinking it had none, and would show the red battery until plugged in for 10 minutes or more.

It would also report to be at 1% battery for hours, and when I'd plug it in it would shoot up to a more sane number.

It's cold in Indiana right now, so anytime I tried to use my phone outdoors, it would almost always just die thinking the battery was dead, even with a full charge.

It was either time for a new phone or a new battery, and I'm not a fan of the much larger, smoother iPhone 6 style.

Uneventful (in a good way). I had a screw over the battery compartment that nearly refused to come loose, but I eventually got it.

The battery "pull tab" was not at all helpful, and felt like it was stretching as I pulled, so I got under it with one spudger, and pried it enough to leave it in there as a fulcrum, while I got another one out (from a prior repair to an iPhone 3), and worked it loose.

Now my phone is acting like new and getting nearly 2 days on a full charge.

Take your time and have a clean and well-lit work area. I placed the screws in the case my repair part came in, and placed them in the same place and arrangement as if the phone was in the box, so I didn't get the different type screws (which look nearly identical) mixed up. 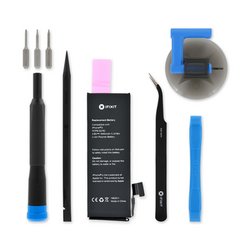