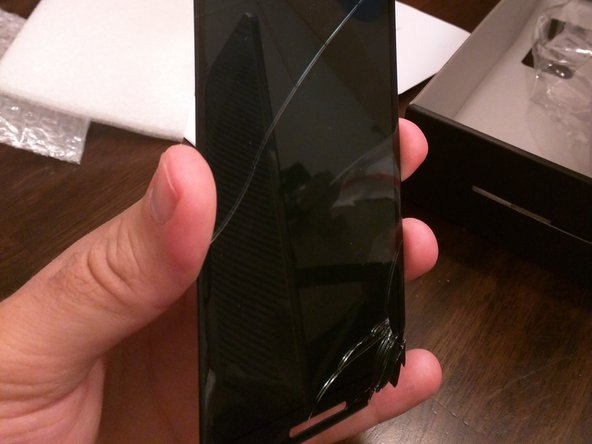 Recently I dropped my Nexus 6 and shattered the screen. This, in and of itself, is unusual. Every smartphone I have ever had had a case and a screen protector, and dropping it simply resulted in me having to pick it up. But with this phone I wanted to take care of it in a different way, and I bought this wallet[1] to consolidate all of the crap I carry around with me. I figured that the only time I'd have it out of the wallet is if I was actually using it. But I'm apparently lazy, and had the phone in my lap while driving home. By the time I got home I forgot it was there and just got out, which of course ejected the phone out onto the concrete, shattering the screen from the bottom right corner where it impacted.

So after looking up how much it costs to replace the screen I made my first mistake, assumed that I was both smart enough and handy enough to replace only the glass. The glass piece itself isn't terribly expensive, and I believed that I could replace only the glass. So I ordered the piece, did research on how to do it, and quickly panicked, cancelled the order and got a refund.

Next I ordered the screen and digitizer http://www.etradesupply.com/motorola-nex... along with an iFixit Pro Tech Toolkit so I'd have everything I'd basically ever need for any other repairs that might be necessary in the future. Then I bought the Spigen Slim Armor case because I had one for my Nexus 5 which worked very well for me. My wife's response http://i.imgur.com/OMGMpVY.jpg was just hilarious.

After following the teardown guide Nexus 6 Teardown I quickly realized I didn't need to tear apart the battery side of the phone and let it be. After disconnecting the motherboard from the display assembly via the two ZIF connectors Recognizing & Disconnecting Cable Connectors , I was able to pull the two apart. This left me in a state of utter confusion as to how to proceed. The screen and digitizer replacement had nothing attached to it other than the cables mentioned above. The wide one is for the display and the small one is for the touch screen. Make sure it is attached straight or you won't be able to use your phone at all. Ask me how I know this. Since the display replacement had no assembly attached to it you have to reuse the one on the broken display. Use a spudger to separate the outer ring of plastic that houses the bolt holes. Carefully lift the metal interior and the plastic ring away from the broken screen and be sure to inspect it for any glass shards. I missed one until I tried to put it all back together and it kept it from closing all the way. Once the metal is gone, you'll notice that the back of the display has a foam layer glued to it that protects it from the metal. This is imperative to retrieve. Use a blow dryer or heat gun to loosen the bond of the adhesive, and gently peel it back, removing it in its entirety. Don't let it fold up on itself. Place this backing on your new display, exactly as it was on the old. The adhesive for the plastic ring won't hold anymore, so get some Scotch super glue http://www.amazon.com/gp/product/B0009F3... and apply a drop to a cotton swab and brush the inner sides of the display outer glass layer, which will be in contact with the plastic ring. Combine the ring, metal assembly, and display and hold it all together for 30 seconds or so. This process of reusing the assembly is a bit of meticulous work but will save you about $80. Reconnect the ZIF connections carefully to the motherboard and follow the teardown in reverse to finish putting it back together. One step they miss, however, is that in addition to the battery connection in the bottom right of the phone, on the top left is the connection for the physical buttons on the side. Remove the rubber cover and snap the ribbon cable that leads there back into place. You won't be able to power on your phone if you skip this step. Replace the rubber button cable cover and align the back cover and push it down to adhere the back of the phone once more to its innards. For the moment of truth, press the power button and pray to the old gods and the new that your phone turns on. Once it powers up, go gloat about your repair prowess to the next three people that you see. That's what I did, anyway.

My success is evidenced but the fact that I took this picture found below and typed this post using my fixed phone. It's not impossible. You can do it.

ZIF connectors are finicky. Be super careful both when you're opening them and when you're reinserting the cables. Make sure both rubber hidden doors have the cables plugged in afterwards.