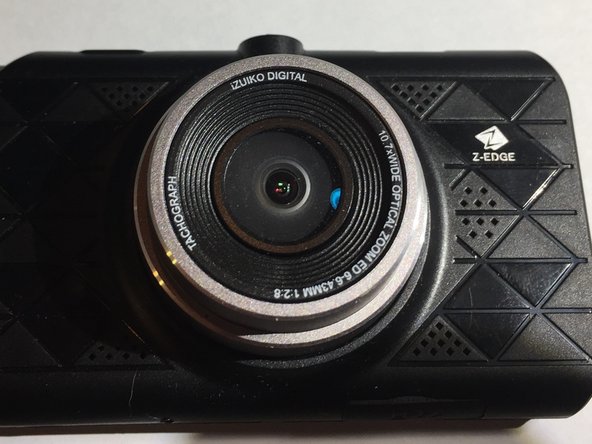 This guide is a teardown of the Z-Edge 3 dashcam showing the internal components and how to access them. This is not a repair guide - just a teardown guide. This is an easy teardown.

is the battery glued down? mine stopped working and i feel like it’s due to a failed battery. I need to replace it, but not sure how difficult it is to remove or what to replace with

EDIT: I’ve successfully followed your steps up until the battery removal.

It’s held on with a little bit of adhesive but its completely wrapped in this plastic and the wires seem to be soldered on.

Looks like more time and tools are needed to replace this battery.

Good question. I pulled mine just now to see and you’re right, it is a pad with adhesive holding it down. Be careful lifting it as there is a tiny circuit board on the pad end. Unfortunately I have had the replacement camera fail in exactly the same way and I contacted their support but they will not replace this second defective one. These unfortunately are not reliable. Post back if you are able to get yours working with a replacement battery. I think the battery might only be used for the parking mode but I’m not sure. My voltage measurement on my battery is zero with this installed. For grins I may try to plug it in and then check the voltage across the connection on the circuit board. Good luck.

I’m able to power on my camera board (I have it plugged into the PC USB), it triggers the computer USB storage but the PC will not mount the card storage. With it plugged into the PC USB port the battery charging voltage is 4.1VDC. I’m not sure that I ever used the parking mode so I don’t know how log it takes to deplete the battery but I don’t think it stays charged very long.

The battery also retains the date and time, which I believe will cause the camera to overwrite the newest (now seemingly oldest due to incorrect date) video. My theory is that you are in an accident, camera is recording, you shut the car off to check damage, you restart car to move. Now you just overwrote the video of the accident. the circuit board attached to the battery is likely the protection circuit to keep the battery from over charging/discharging. As long as the replacement battery has the board, is a pouch style and somewhere near the same capacity, it should work electrically. I considered replacing my battery with 3 externally mounted D cell batteries connected in series with a silicon diode so the camera can’t try to recharge them. The stock battery is claimed to be 210mAH, a D cell is 10,000mAH. 1.5V x 3 = 4.5V. 4.5V - 0.7V + 3.8V. 3.8V should be within the voltage range to work fine. My guess is the batteries would last 6 months and be readily available and easy to change.