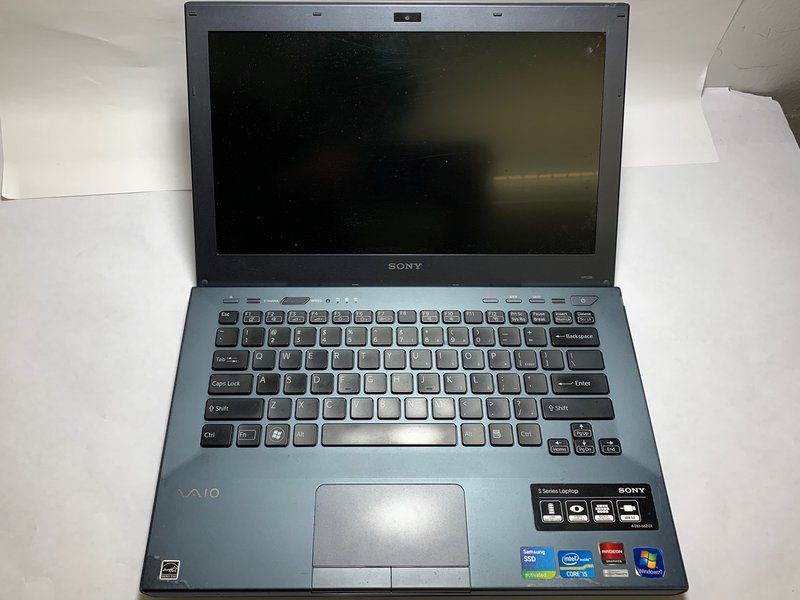 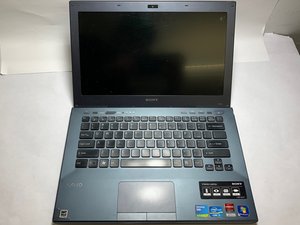 No sound or light from device after attempting startup

The device battery may be improperly connected to the respective fitting for the battery. Check the connection between the device and the battery. Otherwise, the device may have a faulty or "dead" battery. Plug in the device's charger into its power port. It should begin to charge normally. If the device is unable to hold a charge, it may be necessary to replace the battery.

Screen is unresponsive / Screen is black

The laptop's screen is not responding or showing any sign of powering up.

The device is powering on but the screen doesn't turn on

Check to see if the computer has any form of battery life. Many times, the screen is vacant due to lack of battery life. This problem can easily be fixed by plugging the device into a wall charger. If any of the LEDs surrounding the keyboard emit light, but the screen is still vacant, you can try pulling the battery out to reset the device. If this still fails to result in a working screen, the next step would be to replace the screen.

Battery life is commonly shortened over time. If a battery is fairly new, there may be charging issues. Older batteries (batteries after approximately 6 months of use) are commonly drained at a quicker rate. Replacing the batteries can be easily done bye pulling the back cover of the laptop off. The battery used in the Sony Vaio is a snap in battery, requiring no wiring. Upon completion of battery replacement, it is an excellent idea to put the back cover back on before use.

Pages or websites are not loading properly, or programs that require internet access are having connectivity issues.

Cannot connect to the internet

The first thing to do will be to check whether any open wireless networks are available from your device. If so, you’ll want to connect by using the Internet settings local to your device. If it’s a home network that is not connecting, you may have to reset your connection by turning off your internet router/modem for 10 seconds and turning it back on again. If these options fail, you may have to replace the networking card.

Internet Service Provider is not responding

Make sure you are in a location that has wireless internet access. If you are in a location with internet access but you are not seeing a prompt to connect to the internet, there may be a problem with the device’s onboard WiFi card; it may need to be replaced with a new WiFi card. Should this fail to resolve the issue, there may be other issues with a home or business connection which can be on the Internet Service Provider (ISP)’s end; they may have to address additional problems with connectivity from the provider’s end.

The laptop suddenly shut down due to high internal temperatures and is hot to the touch.

When the computer suddenly shut down and is hot to the touch, the internal temperatures are most likely too high. In this instance, you will want to wait for the computer to cool down and check the computer ventilation for problems.

The ventilation system is dusty

After using this computer for a year to a couple of years, most likely there are lint and dust that have collected in the vents and fins of the fan if it has never been cleaned before. This causes a lower airflow for hot air to escape the system. To clean this, take a can of compressed air and blow into the back-ventilation vent or from the vent at the bottom of the computer. If no dust escapes or heating issues persist, then take apart the computer to properly clean the fan.

The ventilation system is blocked from the outside

When ventilation is obstructed, then hot air will have a difficult time escaping the system and lead to overheating issues. To prevent this, make sure nothing is in front of the back or bottom vents. Specifically for the bottom vent where the computer intakes air, be sure to be on a flat and solid surface. When the laptop is on a flexible surface, such as a blanket or on your bed, the flexible surface will sometimes push against the ventilation vent and stop airflow. If you cannot move the items that obstruct the vents, then relocated the computer.

The device fan no longer works

If you feel no air flow coming out of the back vents, or not hearing the fan go on, then the fan most likely requires replacement. In order to replace it, follow the step-by-step guide on how to disassemble the computer and replace the fan.

Device powers on but fails to boot

The laptop powers on and starts prompting the user, but will not allow the device to fully boot up

If the device is not booting past the startup screens, the device's hard drive may be corrupted. This issue more commonly occurs with older devices which have seen more use. Try restarting the device once. If the same error comes up again, this is likely due to a corrupted hard drive which needs replacing.