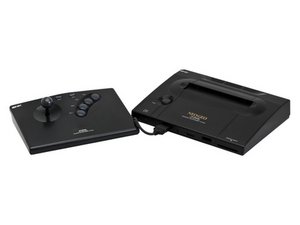 A home gaming system known as the Advanced Entertainment System, produced by SNK. Released to rental stores in January 1990. The console saw public release in 1991 due to popular demand.

Can you repair the Neo Geo Pads?

Hello there, I own a Neo Geo Pad USB for PS3 and said pad is based off of the Neo Geo AES Pads. However, the micro switch pad tends to stop sending input in certain directions.

If it is possible, Could you repair the Neo Geo Pad USB and all SNK Neo Geo pads in general? I'm willing to pay like 30 to 50 dollars for the repair services of said controllers.

Waiting for a reply

P.S. The Neo Geo Pad USB is also a PlayStation 3 Accessory that is based off of a Neo Geo Pad. Could you also add the SNK Accessories to the Sony Accessories?

Please help I had my tablet 2 months please respond.