MacPro does not power on... and does not attempt to boot

This machine has not been used much. It was purchased in 2011, and has been idle for about a year.

It was working fine when I shut it down a year ago. 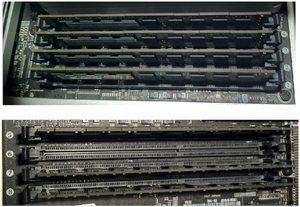 I believe that this is way it came. Above, I indicated that my son my have borrowed some memory but I was wrong.

Thanks for your interest, 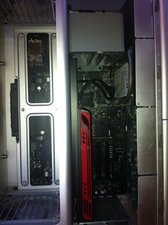 The upload tool is a bit funky. 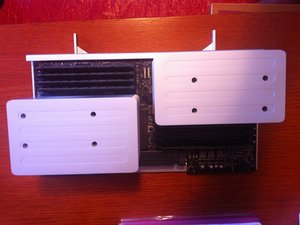 Still funky... The point with pics is that there is virtually no dust.

Are any of the internal diagnostic LEDs on?

And the advise in the Diagnostic section asked the same question you have.

I will get to this tomorrow in Toronto time... and then re-port my findings.

The MacPro machine is an 8-core... I have been looking at the memory...

I have a sense that my son liberated one stick of 4 GB.

So I pulled the 1 GB stick from slot 3 in what I think is in accordance with the Guide,

But it made no difference.

I appreciate your response,

When attempting to diagnose this machine, always take it back to the original configuration first, that includes any added PCI cards, Added RAM and added hard drives. Also knowing the exact machine is helpful.

Ok, so I did the diagnostic tests and the first failure observed was re: Page 35, wherein the Apple Guide asks me to 'momentarily jumper' the SYS_PWR pads on the motherboard.

I did this by itself and then while holding down the Diag button.

The expected results from Apple Guide was the fans should turn slowly... etc...

My results were nothing happened.

I also reset the RTC via the button next to the battery BR2032.

Lastly, when plugging the power cable in, both Red lights entitled OVTMP CPU A and B flash momentarily red, which seems to be good.

Curiously, Apple does not offer advise for the SYS_PWR diagnostic when it fails.

Any ideas or observations would be helpful,

Would you go here and input your serial number so we know your exact machine: http://www.everymac.com/ultimate-mac-loo...

The two main failures on this model are first the video card, then the power supply. The power supply is sneaky as it will partially fail. It usually begins with unexplained reboots. This may only happen once or twice a week. However as time goes by the frequency of the reboots increases until you just can't stand it anymore as it's doing it 5-9 times a day. On the 6 machines I've worked on, all responded well when the supply got replaced.

But I don't want to swap the logic board/backplane, until i'm sure in 100%, that the problem did not came from the power supply.

Now, logically, if i'm understanding well, STBY means: the power is going to the backplane, but the backplane aren't receiving enough power, to properly power on the Mac, and then the logic board are in standby mode waiting for the enough power to come.

Now, i'm waiting a friend to come with the Mac Pro that he own, to make a test with the working power supply, if mine power on with it then i'll buy one if no, then i'll go for the backplane.

Mohamed My answer hasn't changed. Let's wait and see what the new power supply does.

The friend of mine will not come until this week-end and maybe not, I don't want to be in the STBY too. So i have to buy the PSU in this coming three days.

And before i buy the power supply, i just want to make sure, that i've forgot to mention on the last comment, that i own a 2009 Mac Pro 4.1.

So, would the power supply solve it's problem?

I'm waiting please for your answer to click on that purchase button on eBay!

I just want to add, that, if i jumper the SYS_PWR by a copper cable, the fans won't spin.

Could it be here once again the power supply?

It didn’t solve that problem, still the motherboard shows the same thing with the new PSU! So it’s the backplane now, i’m going to change it, but after getting it’s budget!

I'd treat it as a standard NPNV (no post no video) and strip it of all non-essential POST hardware, including all accessory cards and all RAM beyond the minimum POST requirement. After that, swap the RAM sticks and see if it will post with each different pair. Also try using non-standard RAM slots if the initial slots don't work (it could be a dead channel).

Worst case if it's a dual proc board is you pull one of the procs, and try the NPNV rotation with each processor individually. The goal is to rotate the minimum hardware spec until you can determine which part is failed.

Thanks for the suggestion...

I will do a bit of reading and try your suggestion.

Did you have any luck with this? I have a Mac Pro 4,1 (single CPU) that is exhibiting the same symptoms. It was on 2 days ago, now no power on at all.

Hi Max Entropy! Thanks for the quick and detailed reply. (I'll stick to replying to this thread, instead of starting new answers...)

I, too, have a second working machine, but I've yet to start the process of swapping components. My hunch is the same as yours — a surge has damaged the power system on the backplane board. The diagnostic button shows 5V on the backplane board, but jumping the SYS_PWR jumpers has no effect, which is all the detail that the Apple technician guide goes into.

So, I don't have any questions right now, but I would be very interested to hear how your new power chip works out.

Steve check your email...and then iFixit... For my reply below

Hi again! Any luck with this? Hope your Mac Pro is back to life...

Did your Mac Pro 2009 worked by, changing the logic board? because I have the same symptoms as your Mac!

I didn't do a full logic board swap, but swapping processor trays from a known-good Mac Pro 4,1 resulted in:

This is really sad, this could be the surge in the motherboard, that affect all other components! But the suspected CPU tray, was originally took from the working Mac, or the original that came with the faulty Mac?

I moved the Mac to an technicien, to see if he can repair the power supply. He reported to me that, every time he change its transistor, the PSU become again faulty, and same thing if he change another time that transistor.

IMHO, I suspect that the power supply must be totally replaced not the components, because it's the power supply that allow or block the surge and the short-circuit, and it should be replaced but not repaired.

Because if you continu, swapping or buying other components such as, the backplane cpu tray, i think they will have the same problem. See if there's humidity in the case!

An example here, but from PC not Macs, my sister home had a very big surge, that occurred 2 years ago, 80% of the electronic things died, except TV's and Refrigerators and only one computer survived. This one had Corsair 650TX PSU, while another computer completely died, from the PSU to the CPU. And the one with that Corsair PSU still work, even if the motherboard was made for the 1 generation Intel i series CPUs, the PSU and the GPU now makes a small sound, like the bad electrical sound, but they still work, with no problem. I'm sure, that the PC with Corsair PSU, should be died without it!

This is just my opinion.

I’m having the same issue as stated above… diagnostic LEDs say backplane and PSU are okay but machine won’t boot or jump start (with all hardware stripped out… processor cage, graphics card etc). Even stranger thing is that I’ve replaced the back plane and swapped the PSU with another of my machines but still the same result!? Obviously something is wrong but it’s impossible to say exactly what…

My Mac Pro 5.1 has the same situation.  Who has solved the problem please share

During storms in Sydney a week ago we had a power surge. TV acted strangely for a while the next day but eventually recovered. Thought nothing more about it.

A few days later Mac Pro started to refuse to wake from sleep state (breathing LED). Then yesterday refused to power on. No front white LED, no clicks, chimes, fans internal LEDs - nada! Seems utterly dead. However, pushing the diagnostic button on the backplane near the Front USB card causes one orange LED to appear.

Seems like the consensus is one of two solutions - new motherboard or new power supply. Both are big $$$, so any further thoughts would be appreciated!