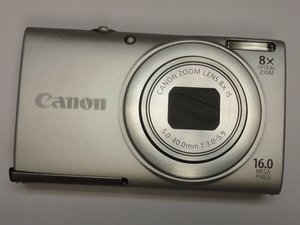 Canon PowerShot A4000 IS

The Canon PowerShot A4000 IS is a digital camera offering the user 8x zoom, a 28mm wide-angle lens and a 16 megapixel image sensor. This camera can be directly linked to your computer to upload images and HD video.

Camera Lens stuck and won't go back in!

In 2013, my parents got me a camera and it worked very well. It was never dropped or anything but one day while taking pictures at a parade the pictures started to become blurry and later that night the lens wouldn't go back in. For the past few years I've read about simple fixes online but nothing has worked yet so I gave up on it after awhlie. Today I charged the battery up and put it back into the camera and I wanna try again.

The lens is fully out and when I hit the power button I hear a weird noise and see the first two parts of the lens attempt to move but the lens doesn't go back in. When the camera comes on a lens error message appears and shuts back down.

I would love to get my camera working again because lately I've gotten into taking pictures and the camera is pretty new. It messed up probably 6 or 7 months after getting it. We never bought a warranty for it. Any help appreciated.

Note: I have cleaned the camera up a bit since the pictures were taken. It's been sitting around awhile so it got a little dusty.

@wishfulthinker that is one of the most common errors with any digital camera. Take a look on here for some ideas on how to possibly fix it. Most of the time the only thing to do is to replace the lens. These guides will at least get you into the camera.