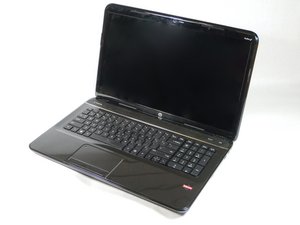 Why is my laptop beeping during boot after repair, screen black

So I decided to clean the heating fan on my laptop after it was making noise (hp G7-1167x). After about 3-4 hours I disassembled, cleaned, and reassembled it. It was a pain in the ass (first time ever working on a computer). However when I turned it on, the computer powers on, beeps for a minute or less, and the screen is black, the caps lop button flashes too. The only things I can really think of is

- I didn't put electrical tape that I took off on the connectors. though this doesn't explain the beeping, or why the screen is black, unless I was supposed to put it on the screen LCD connector maybe.

-a couple of the Ribbons had a line you line up and slide into a bracket and close it. I lined them up as best as I could, but a couple would stay just a little bit outside the bracket without going in, it was impossible to push them any further in.

-I had trouble putting the ram (I think it's the ram, it's right by the Card, rectangular piece) I'm not sure I put it back in right. Could this have caused it?

-I somehow damaged the computer possibly. Didn't have tools.I had a crappy philip screwdriver and no plastic pry tools. I know not to use metal on connectors even if it's turned off, so I avoided it as best as I could but a couple t imes I did take out connector with a metal pry tool. I was very careful and took out the battery first.

-there was a small piece I broke on the top left, so I took it out and a metal plate by the LCD it was screwed into, because it wouldn't fully close the housing since it was broken. Though I don't see how this affect it. I'm pretty positive I didn't damage the LCD, I didn't really touch if, and there's no likes or anything it's all black.

could I have damaged a backlight? 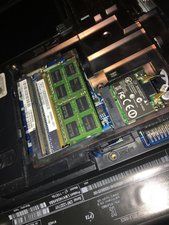 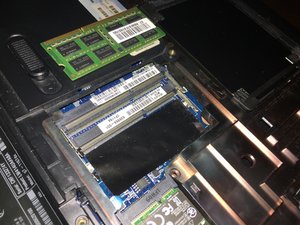 Hello Ali, I'm sorry your having issues with your hp G7-1167x I will like to suggest if you can provide pictures of the memory slot. I do believe there may be damage on the RAM slots causing the beep issues and no image.

How do I add a picture? I don't see the option, I'm using my iPhone

Hey I added the images in an update, I'm not sure if I put the ram in upside down or in the right spot, it appears there's two different slots

Try blowing the contacts of the memory slot and the ram and insert the ram and the bottom slot and try to turn it on. Is that the only Ram you have?

watch this https://www.youtube.com/watch?v=rXJMmezA... skip to 2 minutes

That actually worked for about ten minutes. I put the ram in wrong, I was very relieved, then my computer just shut off and won't turn on. I think I may have short circuited/fried it, I've tried turning it on for ten minutes. Maybe because I didn't put electrical tape on the connectors. I was charging it, It was fine and working good then just shut off and won't turn on again. Is there anything I can do or anything I can replug, or am I fairly screwed. The ram was moderately warm when this happened, but not hot.

Anyone reading this, invest in good tools and an anti static bracelet, I think crappy tools is half the reason why repairs go wrong.

Yes it is definitely something to the ram slots.

Did you remove the heatsink from the CPU?