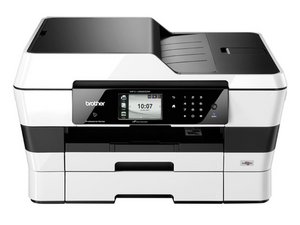 After looking around that generally means some kind of jam, but it's new and there is no jam.

When I lift the scanner bed and hold the red "x" on the touchscreen to move the print head to the middle there is the sound of belts slipping and the print head does not move.

Is there a known way to fix this?

Ha! After getting impatient and frustrated i began poking about the inside the printer and found a belt that wasn't on a cog!

When you lift the scanner lid, in the back-left corner of the machine there is a white gear that is attached to a main horizontal roller. The belt was sitting NEXT to that gear, rather than on it. I was able to push the belt back on with my finger without removing any panels.

Once i did this, i held the red "x" on the panel again and the print head moved to the middle as it should. Everything appears to be working now.