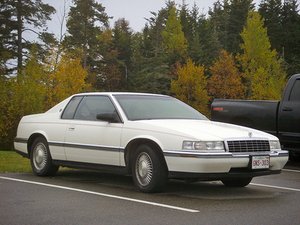 The twelfth and final generation of the Cadillac Eldorado was introduced in 1992 as a two-door coupé.

Got two blocks away during snow storm this week end, it was 9 degrees, go to turn a corner, engine chugs twice and dies in the middle of the intersection. No battery power at all. Am I correct in assuming that the cat will continue running without a battery once it is running , could this be a battery cable? The car had cranked just fine just minutes prior to this happening. Fortunately a couple of guys pushed it to the curb for me. I don't know that much about auto mechanics. But I know how to research and use Google. Went back to fix it today and still totally dead, can't even lock the doors. I think it's the fusible link from what I can research but I wanted to get another opinion like from @lpfaff1 before getting my lilly white hands all grubby ;-(

I contacted Auto Zone and that was like talking to an Apple Genius. He was trying to sell me a fuse. I found this but do not know which one to get for a 1996 Cadillac ElDorado LTD. Anyone knowledgable about this?

Put in a new high end battery and it cranked right up and I got it home. NEW PROBLEM - I'm getting no charge to the battery. The alternator belt is a serpentine and appears good. I'd like to look for a cheap wiring problem before I even think about replacing the alternator, at my age, that's a visit to the dealer. @lpfaff1

The new battery and alternator helped. Then I found myself at the grocery store with a dead car. Turned out there was a corroded battery connection tab that was only allowing partial charging.

I have also seen where the battery cables have become so green inside that power would stop running through them.

Your caddy may not run with battery disconnected especially if something else is on drawing power or if alternator weak.

@mayer what happens when you boost your Caddy? Does it do anything with that?

@oldturkey03 Have not tried as it cranked just fine but died 4 minutes later and there is no sign of even a dead battery being connected. I've had batteries go bad before but you at least got some power to the interior lights and dash. It is totally dead, I can't even lock the doors with the key.

Give it a try and see what you get with a boost. There is no "fuseable link" in the Caddy's but there are 2 banks of Maxi fuses, check those. I seem to recall that Cadillacs use something like a Battery Guard Programmable battery protection to prevent accidentally draining of the battery. This will shut of all electrical power and it turns back on with activity on the information center, opening door etc. The point I am trying to make, that if you have zero, nada, null power with a boost or new battery, then that is where I would start. You need to get at least a light, dash or otherwise, with a new battery.

The MaxiFuses and relays are located next to the engine

compartment fuse block on the driver’s side of the

engine. I'd be looking at BATT1 BATT2 BATT3 just to make sure.

@mayer , Not familiar with Cadillac fusible link, but could be the issue. Check the battery connections as a first step, remove/clean/tighten/ check for 12.2 v minimum check ground to engine, follow positive wire to where ever it connects and check/clean/tight and try. Check all your fuses, you may have 3 or more fuse box locations(not positive) a couple under hood and one in the trunk. Try giving it a boost.

Found this info. at just answers, one fusible link that is inline with the positive wire that runs from the alternator to the fuse/relay center on the left side of the engine compartment. I will keep thinking on this and get back if I have any other suggestions, hopefully others will step up in helping solve. Good luck.