Wasn't sure if I should extend my previous question Screen issues after impact or liquid w/ another comment or adding an "Answer", but since this is specific to the repair, rather than diagnosis, maybe it's cleaner to start this new thread (but tell me if I'm wrong!).

Anyway, I rounded up an identical donor machine and moved its LCD panel over to replace the damaged one in my previous question. The seller stated that the screen was fine before the machine stopped working (liquid damage on donor MBP). However, when I connect it and fire up w/ the replacement panel, I get video but no backlight. As you'll recall from the previous thread, the backlight circuitry on the MacBook Pro itself seems intact, since the old broken LCD lights up just fine.

1. What do you recommend I check/test, in order of easiest first?

3. Should I try swapping LVDS cables too, since those appear to be fairly easy to change?

EDIT 10/19/17: Photo of the LCD connector on the panel's PCB. Sorry for the quality...was holding one iPhone as a flashlight and shooting through the extra-magnified part of a magnifying glass w/ another iPhone! Note the completely destroyed 1st pin (outermost)... 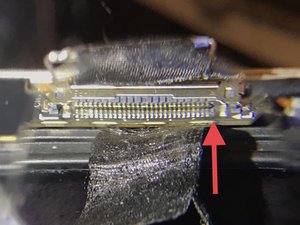 If the old screen is lighting fine, and the new screen is not (and you have tried plugging in the old screen after, to see if it works), the issue is with the new screen. You can try swapping the LCD cable, but I highly doubt this will resolve the issue, it is likely the screen PCB which is liquid damaged inside the hinge cover. As long as you bought a 2015 A1398 model, there will be no compatibility issues.

The cables from 2012-2015 Retina 13" and 15" models are all the same, the difference is the screen panel itself uses a different layout of components, so they require different signals/voltages in different places to the older models.

You probably should have just bought a replacement screen, NEVER buy a liquid damaged donor to swap parts from. Liquid very easily gets spilt over the screen, goes into the hinge cover and damages the PCB (or backlight sheets). Your best bet is to just buy a replacement lid assembly, from checking your original question I can see the original screen is just damaged.

Thanks, Reece. I totally get it. My approach may be less than ideal to some, but my logic for picking up a donor machine (and one where the seller said the screen was in good condition) is that I can also make use of or sell the other functional components to defray costs. For example, the 256GB SSD module is fine and worth either money or functionality to me.

Anyway, is there anything I can try to further assess or correct the replacement panel? Is this PCB you mention replaceable w/o actual LCD removal since it's under the cover? Enough removable parts between the 2 display clamshells and perhaps I can Frankenstein a working display together! Thx again!

The only part you can swap between the assemblies is the LCD cable, the PCB is attached to the LCD panel itself. You can check the PCB for liquid, sometimes there will be some visible, but sometimes it will look fine (although it isn't).

If you have tried the old screen since, and it is lighting fine, it means the new screen is definitely bad.

Well, it has only been half a year, so I might as well revisit this, right? :-P In re-tackling this, I verified that the original damaged screen does indeed still light up when reconnected. I then swapped the LCD cable from that display to the replacement, crossed my fingers, and...no dice. Getting that far in, though, I was able to scrutinize further and believe I found our culprit. The furthest left/outboard pin on the PCB's LCD connector is obliterated. I don't see a way to add a photo here, so I'll edit my original question above.

You said this PCB is attached to the panel itself, so I guess I'm sunk w/ this panel. Just to verify, no way to repair that (like sending it to someone)? Thx, Fred

You can replace the LCD connector on the PCB (do this quite a lot myself, just have the assembly upside down on a table with the PCB sticking out, to avoid heating the LCD), but if there are any other components on the PCB which are required, it is not worth it.