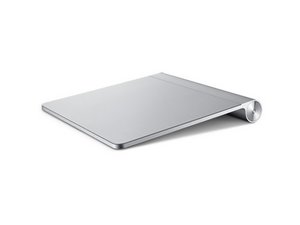 Repair guides for the Magic Trackpad. Released in 2010.

I have a Magic Trackpad original. Recently it has stopped tracking accurately - if I move my finger around on the trackpad, the cursor responds intermittently. I have installed new batteries, which the iMac recognises as 100% charged.

Now the tricky bit. If I lightly touch the aluminium at the top of the trackpad, above the glass trackpad proper, with one finger then the trackpad begins to function properly and track accurately!

It's not the iMac causing the problem - I have connected the trackpad to two other devices (2012 15" MacBook Pro; 2015 13" MacBook Pro) and the symptoms persist. I have also connected a Logictech T651 to all three computers, which works just fine.

I think that it is something to do with earthing. I have rested a small ointment jar on the same place I touch - which is heavy enough to apply similar/greater pressure than I do with my finger - and that makes no difference.

Has it been dropped at any point? it sounds like there is an issue with the connection between the trackpad surface and the controller board within the battery compartment, but that doesn't typically just wear down. it sounds like it has suffered from a knock of some kind.

The only other possibility, which you have already ruled out with your tests, is if there is some interference to the bluetooth frequency. But as you've tried it on multiple machines, and have used other bluetooth devices in the same work zone, that near enough rules it out.

They are so fiddly to work on, so typically when a fault like this occurs, its not worth the time tracing or diagnosing unfortunately. so unless you can see some physical damage that can be repaired, you may have to write it off.

Sorry, i'm sure its not the answer you were hoping for.