Why is my MBA restarting on its own?

My MacBook Air is restarting on its own (typically after about a minute or so, and it takes something on the order of five minutes before it comes back on).

Doesn't matter whether I'm on battery power or plugged in. It may be load dependent since if I turned it on and didn't do anything it seemed to stay on longer, but if I turned it on and, say, tried desperately to copy off my data to a thumb drive, it would turn off within a minute.

Took it to the Apple Store and it started up with a noticeable visual disturbance on the screen (a couple of horizontal lines flickering at one point in the startup scheme) but wouldn't run long enough for them to complete the diagnostic before cycling power, so they told me they think it's a logic board problem.

Since my issues started with an external monitor that makes me think graphics, so is the graphics integrated on the logic board for this model (A1465/EMC 2558)?

I've already opened up the case and pulled the SSD to directly retrieve my data...

Are you getting this message appearing on your screen? 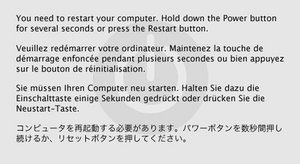 If yes it's a kernel panic which is similar to a blue screen of death you see on windows machines.

If this is the case, the issue is caused by hardware. If you can confirm this is what you get on the screen when it restarts on it's own then we can confirm it's a hardware issue.

Post an attachment or link to the kernel panic logs if you have any. More info on where they are here:

The logs are very good in to diagnose what part of the hardware is causing the issue.

I actually don’t get any error message, the machine just reboots. :(