I bought a A1106 1.5ghz PowerBook for very cheap and decided to follow this guide Ultimate Mac Overclocking and tried from 2 GHz backwards until I managed to get the PowerBook to boot on Safe Mode @ 1.83 GHz. 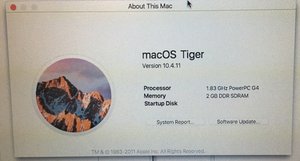 It has the A7447B CPU meaning it was probably under-clocked to 1.5 GHz? 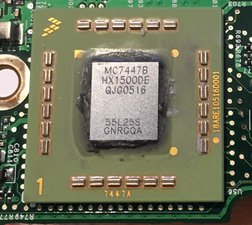 Anyway the thing is: It only boots on safe mode otherwise it gets stuck on the boot screen and the wheel doesn’t spin.

And that’s when it boots at all sometimes it stays on the black screen beeping random codes - one, three, four times - on each boot...

Will try a clean install if it doesn't work I guess I'll take it back even further to 1.75ghz…

Has anyone successfully overclocked a PowerBook Alu before?

ATIccelerator pushing the GPU 30% above stock

PLLs jumped from 9x to 11x = 1.83ghz according to the multipliers sheet 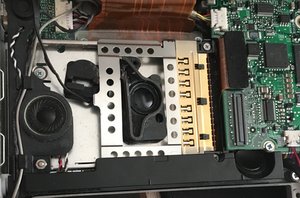 Lots and lots of copper shims:

Glued a few shims on the heat sink itself and used thermal pads to attach shims on the back of the CPU/GPU - don’t know if any of that would really help to keep temps low but I figure it can’t hurt... 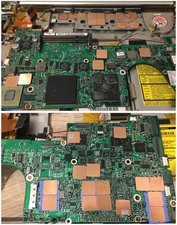 1.75 GHz won’t boot at all and 1.67 GHz boots on safe mode but gives back grey screen on regular boot.

Oh and none would boot the install disk.

I decided to buy a A1106 logic board @1.67ghz stock and just go with that since this one didn't work well.

I am also considering to buy another SSD and put it on the DVD drive to RAID the thing but I can't find a caddy for the PowerBook does that even exist - and if not is there any adapter available that I could use?

I would like to point out that with the exception of the SSDs everything else is coming very cheap plus I am enjoying this project - would enjoy more if I could overclock it but anyway… So the thing is I'm not expending that much money on it and it is mostly for fun not to be like some PPC fanboys out there :)

Oh I almost forgot about this…

Well turns out OSX has something on its code that prevents this to work but if you manage to install OS9 it'll run at the overclocked speeds.

I sold to someone who managed such thing and he's really happy :)