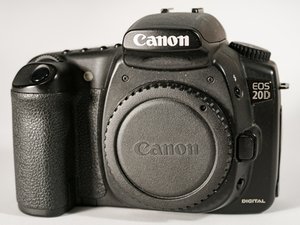 My wife wants to get into photography, ive already got a bunch of lenses etc... for my EOS, so ive been looking aroiund for a cheap used body for her too.

Does £40 for a 20D in pretty mint condition with battery+charger seem ok? Its 8.2MP and takes CF cards, no live view or filming mode, but it takes EF-S lenses and seems modern enough otherwise (usb interface etc).

For reference, I am going to refer to this camera in USD ($52.85). Any USD->Sterling Pound translations are done online, so bear in mind my numbers may be off.
2021 NOTE: These days, I usually don’t recommend these CF era DSLRs due to the age and 25k shutter issue unless you’re basically getting it at bottom barrel pricing, and can front the battery replacement. Look for a midrange “i” camera or buy someone’s older high end DSLR like a 5D MIII or newer, making sure it supports SDXC. With cheap XC cards in the 128GB class, these are not “bad” but are an iffy recommendation.

Since this camera is so old and has been superseded multiple times, they are generally worth very little as you have found out. It doesn’t make them “bad” cameras, but if something happens to the camera it’s generally cheaper to buy another one. If it breaks, do not be surprised if you find out the repair cost is as much as another body.

The most common issue on Canon DSLRs is the shutter failing (noted by constant clicking with Error 99, if the CF card/adapter and cleaning or replacing the lens contact fails). Many of the older entry level DSLRs are rated for 25k actuations while the newer ones are generally good for 50k before the shutter is *officially* EOL per Canon and you are considering one of the 25k ones. While this isn’t an issue with most hobby shooters, beware of professionally used ones. That said, Canon is conservative so they tend to go past 25k with the right care, but if it’s been abused it tends to fail sooner or may make it to 25k sharp and die. If possible, get the actuation count (this is often tricky on “cheap” units like the T3, but easy on models like the 20D due to being formerly high end models) and get the logged actuation count.

On a camera this old if the seller seller refuses to disclose it (or doesn't find out how to give you a rough idea) they’re probably hiding a high shutter actuation count. Unless it’s cheap and you can buy a replacement on short notice, do not buy these “unknown” cameras. Ideally, you want one with 8-10k or less. The reason? Shutter repair requires a complete teardown and totals the body out! On average, it’s usually $100 (£76.40)-150 (£114.60) plus part cost (usually used since the part is almost certainly obsolete as far as Canon sees it with the 20D), give or take depending on the shop and area you live in just to give you a rough idea of how quickly a major service like that will total out a high usage camera like this. That said, you’ll probably never see it fail but try and get a low use one so you’re not dealing with a potentially short lived camera. Don’t let high mileage scare you, but pay accordingly.

Other then the shutter problems and bent/broken CF card pins, there is not much that goes wrong with the 20D and the modern Canon DSLRs. It is still an excellent camera today as well since you need to focus more on lenses over megapixels as all of these high megapixel sensors tend to be noisy and you usually need on camera filtering to combat the issue (Canon does a good job like Sony, but you shouldn’t need to filter against this to an inch of the sensor’s life to *begin with*). With these older low megapixel cameras, the sensors aren't prone to such issues. You’ll also want a good CF->SDXC adapter as well - these are cheap and SD cards are much more common than CF cards are today. However, these are (sometimes) error prone, so you may want to carry a real CF card for memories that may be hard to revisit and replace any lost photos - and when you can chance it, get a 64-128GB SDXC and see how much you can get away with reliably.

High capacity storage is sometimes spotty (and basically *requires* CF>SD), cheap 128+GB high speed SDXC (these may not work in these old CF Canon cameras), the shutters are a real issue now (not an issue in 2019, just an advisory issue) and batteries are dead (or you're on your own thanks to Samsung).