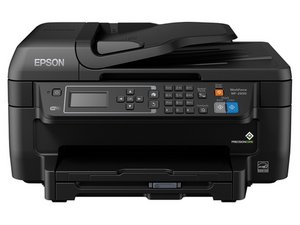 Epson WorkForce All in One printer WF-2650

I moved this P.O.S. from the floor to my desk and now get a 0x9a code, it worked fine before.

0x9A is a broad error code for any issue with the carriage. To see what the issue is, you’d have to open it up yourself and look for the problem.

The WF-2650 is one of those PrecisionCore machines with zero tolerance for head blockages. When it gets bad enough, it crashes after a failed print job every time. It’s usually either a paper track issue or a severe ink clog when you get a 0x9 error. Part of the problem is it shares the same DuraBrite Ultra pigment ink that creates the same exact problem on the 3640 and it’s related models. Since the one you have and the notorious model are so similar, I suspect it’s a shared fault that affects a lot of these older models which lack proper nozzle redundancy.

It’s not as bad on the later black cart Epsons that use a sponge rather then a air based cartridge, since they finally built in the necessary redundancy, but they have a 3rd party ink firmware bomb unlike many of the older ones :(. Don’t buy them - even if they don’t error out as easily. And as an extra middle finger besides firmware bombing 3rd party ink, the waste ink pad is known to have a worse absorption capacity then early models and some early 20XX ones. The days of running the old ones like the C88+ for 10+ years and only having waste ink issues with a page count so high it’s time to retire it ended in 2010. They also kept it going since 2001 despite replacing every other model and only discontinued it sometime in 2018 if my guesstimate is correct. They stopped selling it because it doesn’t fail in 2-3 years and isn’t firmware bomb friendly!

This issue *is* repairable, but if it’s not a track issue, you will need to disassemble the printhead and either buy your own ultrasonic cleaner or take it to a place who can clean it if you do not have the ultrasonic cleaner required. Don’t take it apart unless you can commit to the job, as that complicates things for whoever is doing it for you. Even I’ll tell people who ask when this happens to scrap it unless you are ABSOLUTELY sure you’re game for the cleanup required, as it is a mess and it’s a proper 10/10 job unlike the basic clog situations.

Refer to this video to see if you can handle the job first. The 2650 may be different, but this should be a good starting point. It’s not your typical clog anyone can handle with an eBay cleaning kit. You’re not alone - anyone who has used one (and isn’t a photographer with the 5/6 color machines who only puts up with the BS on the wide format models) is a never again case once they get tired of it and move to laser.