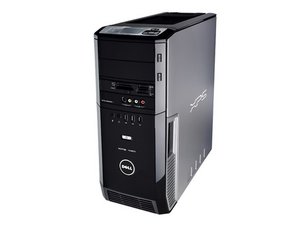 A desktop tower computer by Dell released in 2007.

I have asked this on another subreddit already and I got one answer saying the motherboard in the XPS 420 would limit my expandability options. Also I read some other sources about the XPS 420 and a few people are saying the case is small and it would be difficult to find a motherboard which could fit. Anyway, here's my full post:

I have had a Pavilion since around 2012 and now, 5 years later, I wanted to upgrade it. What I am finding is it is extremely limited in every aspect of upgrading. If I upgrade GPU then PSU needs upgrade, if I upgrade CPU the whole motherboard needs to be replaced, and so on! And I know it has the cute "gaming" tag to it and all, and I am aware of basic components and somewhat dated parts (like the 750ti) but what I'm looking for is good expandability potential for the future! So any help would be appreciated. Oh and my P6000 had integrated graphics and a Athlon II X4 630. So this is already an upgrade! If you would suggest something different (a different model for the same price or better) let me know. Thank you so much!

These are old enough you may have issues with modern operating systems - it isn’t a bad system, but the age of it is a bit older then what I would recommend to most people. If you can get it cheap enough AND can make things work, that’s different but most of the time people struggle with it on these old systems.

This is a downgrade in the memory as this is a DDR2 and the P6000 is DDR3. Dell also had issues with some of their boards back in the day where some boards addressed 4GB and others were capped at 3.5/4GB (if memory serves me correctly) because some of them had defective but functional chipsets which didn't properly address the last 500MB nor was there was no way to know if a replacement board fixed it, because there was still no guarantee your new board wouldn’t have the same problem so you live with it. The i945 boards were hit the hardest by this. The XPS 420 uses a Intel X38 chipset and has 2 different board DP/N references, which was the red flag for these bad boards on the bad i945 hardware back then. This and the OS issues that come up are my main reasons for advising against this system for most.

If you absolutely can’t afford a current system, look for a Haswell desktop with an i5 4590 (i7 if you can afford it)/16GB RAM/Intel HD Graphics or GPU if needed if you have the money. If you do not, try and find a system like the XPS 8500 with the i7 3770 CPU/Dell OEM Radeon 7570 (this can/should be upgraded) and bump the RAM to 16GB if it's an 8GB system. The reason for getting the 7570 system is it’s common and the power supply has the PCIe power connectors to replace that horrible card. You will need a GPU support bracket like this, as the Dell plastic ones are designed for the 75XX series reference cards. This may require a little fitting due to the PCIe bracket retention system, so don’t overtighten it.

If you get the XPS, you may also want to add an SSD and replace the hard drive, especially if the drive is original. These newer Dell computers (5-8 years old) come with the more failure prone Seagate drives that don't age well after ~2 years. To make it worse, they fail without warning and you need to catch it by watching for degraded performance or a ePSA diagnostic failure. If it’s running slow, that drive is dying or the thermal paste is expired (if not both). Many of them won't come with an original drive because it probably died but some of them made it long enough to hide the problem from the original owner. If it's a Seagate DM00/01/02/03 these are known bad drives - DO NOT USE IT. The DM004 is also known to be garbage.

the dell would be a good replacement because the dell has a 4 core processor, a dedicated graphics card, and more RAM