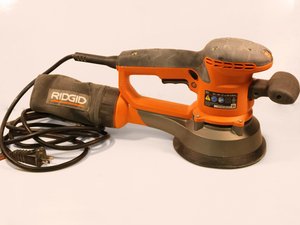 This is a sander produced by Ridgid, identified by model number R2611.

My unit died after a short time of use, I think it could be the varible power circuit board.

How do you bypass the board.

Yhis is a recond unit I bought a Direct Tools.

It is beyound the warrenty date and has very few hours on it.

This is just another example of Ridgid poor quality tools.

I owned four of these. Back in June while I was sanding with one of them, I brushed my arm against the the “anti static” vacuum hose that sends sanding dust to my grounded, metal piped dust collection system and because it was an unusually dry day, I got zapped. I continued working with the remaining three sanders (one for each grit, saves a ton of time by not having to change paper, especially on little “assembly line” jobs) and I got “zapped” a few more times. At the end of the day I tore down the sander, checked the brushes (OK), checked the switch (OK) did a computer search and found that the speed control was prone to failure due to static discharge. Decided to wait for pay-day before ordering a new board. Finally ordered it in early July. Continued sanding with the other three sanders in the meantime.

Shipping was delayed due to COVID-19, but finally got notice of shipping via US Mail in late July.

Waited and waited for the board thanks to the recent postal service slow down. Finally it arrived yesterday (Friday). Unfortunately, last Wednesday was another very dry day and I killed another of the Ridgid sanders, exactly the same way. Realized that it was the second of the two new ones I’d bought last fall because I was so pleased with the two older ones I’d bought in 2015. Stupid me, I never registered either of the new ones for the “life time” warranty.

Other tools do not seem to be affected, only the newest of the Ridgid sanders, but static electricity kills these things. Unfortunately, the speed control costs about half the price of a new sander, worth it if it’s just a bad control and I can get 5 or ten more years out of the machine, but not worth it if two out of four machines fail in a month.

But these are comfortable sanders. They do a nice job and I have built these neat little custom cubbies in the shop to store them. I really don’t want to give them up for some other brand.

Well, Heck, what if I just cut out the speed control? I never lower the speed anyway, so why not. Looks like just a simple universal motor. I bypassed the speed control and removed it from the machine. Crossed my fingers, put on my safety glasses, checked the fire extinguisher, put my mother on speed dial, plugged in the machine and was rewarded when the machine spun up….and then my hopes were dashed as it spun back down, started to stink, and began to vent magic blue smoke. I shut it off and did an autopsy.

The speed control apparently modulates both the voltage and the frequency of the current. I could probably rig up a simple and robust circuit that delivered a constant voltage at a fixed frequency to run the sander at it’s top speed, but I don't really want to engage in hobby tool repair, I just want to make furniture. I’ll keep the three remaining sanders for as long as they work, but I won’t be replacing them with Ridgids. If one of them fails, I’ll probably buy the comparable Bosch. I have one already. No more money for you Ridgid.