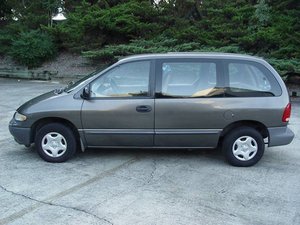 The 1996 model was introduced at the 1995 North American International Auto Show using the Chrysler S platform.

My car starts up and drives fine until it reaches operating temp, then it jerks and dies. It’s a 3.8 liter v6 with just over 100k miles. Problems first started on the freeway when it lost power a couple times; the engine never shut off, it just lost power, requiring me to pull over and then worked ok for a couple miles before repeating the problem. About 6 miles later, it died completely at a traffic light and wouldn’t start again. I pushed it to a gas station service center where it started fine for the technician who agreed to still run it through some tests. They called me two hours later to say the van is fine and ready for pickup. When I went to pick it up, it again wouldn’t start, and now finally showed a check engine light. They pulled the code and changed the cam position sensor. The van drove fine on the freeway for about 10 miles, but once I exited, I noticed a hesitation/jerking when accelerating from a stop; this gradually got worse until it started randomly revving and jerking and then eventually died. Engine would crank but not catch. I left the car parked on the side of the street and returned the next day; then, it started up fine and drove fine until it reached operating temp and then again jerked and died. Same problem of engine cranking but not catching. Over the past few months, I’ve changed spark plugs, TPS, checked for sparking with the engine running, changed engine oil and filter, added fuel cleaner, cleaned the throttle body, replaced the TPS, replaced the PCV valve, and replaced the crank position sensor. It continues to have the same problem. It doesn’t consistently throw a code, but when it does, the codes I get are P0340, P0700, P0120, and P0122. I’ve checked whatever wiring I can get to and while a lot of it has pin !$$&*!, none of it looks degraded.