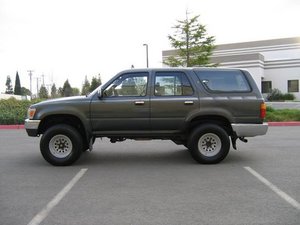 Second generation of the Toyota 4Runner.

Depends on if there was any major changes between the model years. If the engine code is the same, it is usually doable. However, the big issue is more of if you’re in an emissions testing state who has it in the books the engine MY has to match if it ever fails. If it does, then you can’t legally do it but on the other hand if it has to match emissions, you need to make sure that will not be an issue. Not that they would/should know unless the person who did it opens their mouth ;).

It’s not a concern in non-testing states where the license plate is the “certification”, which most are thankfully. But if they do actual tests, you have to see what the books say about it, or just keep a sealed mouth about it.

Compare the 1991 engine to his blown 1993 to make sure. The other gotcha is if the 1991 engine has less power, and the older Toyota ECUs (pre-2002) are WORM so you may need a matched ECU if there’s any changes that matter, especially the tune. It likely doesn’t matter but keep that issue in mind. On the flip side, if you run into an issue with a 2002-present ECU, it can be reprogrammed so those aren’t as bad.

@teensie yes it will. Some of the accessory brackets may need to be transferred etc. but the engine itself will fit.

Toyota 4Runners used the same basic engines from 1990 to 1995 (22RE 4 cylinder and 3VZE 6 cylinder). Swapping an engine from a 91 into a 93 should work fine if they both had the same engine type to begin with. To be extra safe you should make sure to transfer the ECM (Engine Control Module) from the 1993 along with the engine and associated wiring. Of course this is not a simple job. You have to think of all the things bolted to the engine as well, like power steering pump, AC pump, alternator, anti-pollution equipment etc. The YotaTech 4Runner website (https://www.yotatech.com/forums/f116/) is a great resource and members of this site have done this swap.