My xbox 360 slim is not working anymore an lights up red.

The secondary error code that i got is 0033 and that should be error E15.

On the internet i found that some people change the C7F2 capacitor that is shorting out because its damaged. In my case that is not the case and C7F2 is good.

But i recognized a shortage on a different spot. I marked the area in red in the following images. It includes a lot of smd capacitors and a hand full of tht capacitors. I tried to solder out all tht caps (marked green in the pictures). None of them are broken and the short persists even when all of them were out. Afterwards i though one of the 4 mosfets is broken. So i soldered the mosfet out and the nearby smd cap but nothing changed. 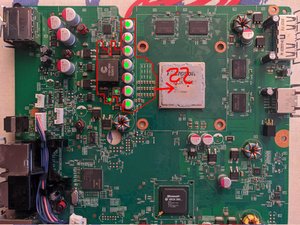 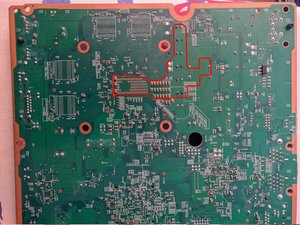 The next i would try is to de-solder all that smd caps on the top and on the bottom pcb side. That is a lot of effort and i don’t think one of them is shorting out because none of them have a visible sign of a possible defect (they all have a healty color:) .

its also possible that the CPU is shorting out the power trace to ground.

Has anyone have a tip what i could try before i de-solder all that caps?