All 8 red lights on the memory boards and no post

@thattechman LED's on the "memory boards" or on the logic board?

They are the ones on the little boards for the memory

The Mac Pro logic board includes a set of LEDs to help service providers troubleshoot the computer. The LEDs are located toward the rear of the logic board, under the memory cage, next to PCI card slot 1. You can view these LEDs by removing the computer’s side access panel and looking through the memory cage to the logic board below. LEDs 2, 3, 4, and 5 are normally off and will automatically illuminate if an error occurs. To read LEDs 1, 6, 7, and 8, you must press the 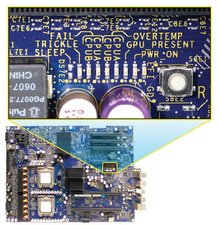 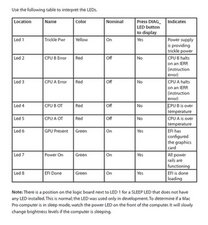 @thattechman you are referring to the diagnostic LED's on the memory riser card:

Both of the memory riser cards include diagnostic LEDs for each DIMM. Each of the LEDs will light if it detects an issue with the corresponding installed DIMM. These LEDs will also flash briefly when the computer is started up or shut down and when it goes in and out of sleep mode. This is normal behavior.

Shutdown and restart the computer.

Verify EFI and SMC firmware versions and update them if necessary.

Reseat the appropriate DIMM corresponding to the failure LED. If the issue persists, continue with the next step.

The Mac Pro computer has two memory riser cards with a total of 8 memory slots. On each card, the slots are arranged as two banks of two slots each. The computer comes with a minimum of 2 GB of memory, installed as a pair of 1 GB FB-DIMMs. Additional pairs of 1 GB, 2 GB, or 4 GB FB-DIMMs can be installed in the open DIMM slots, as illustrated below. Maximum memory is 32 GB.

DIMMs must be installed as pairs of identical size and type, from the same vendor. In the illustration below, like-colored DIMMs must match. 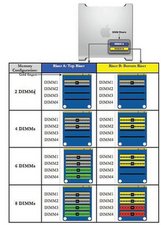 So what if all 8 are illuminated? At the same time ofc

First thing you want to check is your memory. What is all present on this find? What condition is it in?