I broke the battery board data cable connector

I broke off the piece connected to the cable and it doesn’t look like its still in the ZIF Connector. Would it be repairable? Also I lost the piece. 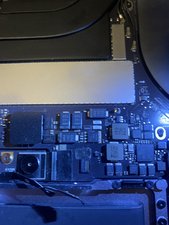 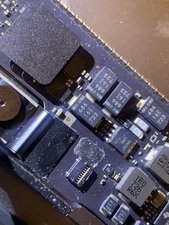 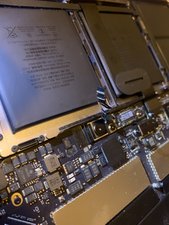 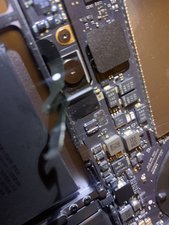 I actually don't think you broke anything. The ZIF connector looks perfect. I'm wondering if the sticker which normally goes over the whole connector is hiding the cable end which is supposed to plug in here. I can still see the two notches which would be the parts that catch in the ZIF connector.

Peel the sticker back, et voila. 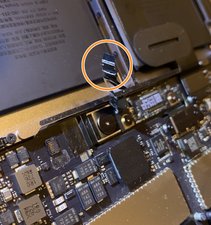 So it's just a matter of making sure the connects and the cable its self are not damaged. Lifting the lever and sliding in the proper end Missile's system should be working again!

We've all been there, my friend, so don't feel alone.

The function of the lever that you're now missing is to act as a cam to exert pressure on the pins to press them down onto the flex cable. This serves two purposes; first to make a solid electrical contact between the connector and the cable, and second to secure the cable in place so it doesn't slide out on its own.

I ran across a discussion on the Electrical Engineering forum on Stack Exchange where they were talking about this exact problem. The original poster was looking for a replacement connector, which would have to be removed from the board (using hot air rather than a soldering iron, I believe) and then the new one installed. Since this is iFixit and not Professional Repair Technician Discussion Forum, I'm going to go with the assumption that replacing the socket would be more of a last resort for you, as it would be for me. Here's a link to that discussion.

So the two choices we're left with are to either repair the existing socket or find another way to secure the cable. It seems quite likely that it would be possible to replace the missing lever; however, that means you have to a) locate a suitable replacement, b) successfully remove the lever from it, and c) succeed in installing it into the socket that's missing it.

That's a lot of ifs in my book, but would definitely give you a good result should you succeed.

The final option would be to make it work as is. The best idea I saw on the Stack Exchange forum was to place a piece of thin plastic under the cable and insert it along with the cable into the connector. It will (and should) be a tight fit, so you'll have to be careful not to damage the cable while you're basically forcing it in, but the extra thickness provided by the plastic piece will press the contacts up to those on the connector and give you a satisfactory connection between the two.

The last piece of this puzzle is figuring out how to secure it. It may be fairly secure by itself, depending on the thickness of the plastic and the routing of the cable, but you might want a bit more assurance. Personally, I think a dab of hot glue placed where the flex cable goes into the connector would probably do the job; you could also glue it in place but I'm thinking the hot glue would be more amenable to being removed when the time comes to disconnect the battery again in the future.

Those are my thoughts on this; of course I'd welcome contributions from repair technicians who.do this sort of thing for a living.

I hope this helps, Misael; good luck with your repair!

In your pictures it does appear you have the compression lever latch! 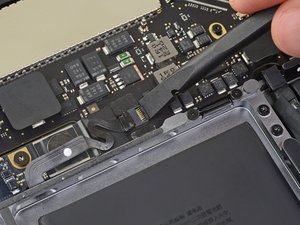 And here we can see it in the released position 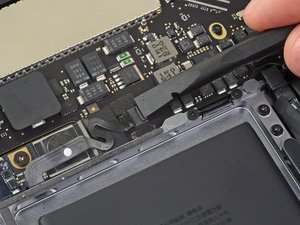 So you may only need a new ribbon cable if the end is damaged. As you hadn't posted it I have to assume the real issue is you can't feed the cable in as in the current state the connector won't accept it until you open it up.

@missile_, after looking over your pictures I think Dan is right. Can you clarify that it's actually part of the cable that you broke off, not part of the connector mounted on the board?

If that's the case, is the end of the cable still intact? That is, the part with the little gold fingers that slips into the board connector? If it is, you should actually be okay; I'm not sure exactly what the function of the cable part is, but I'm pretty sure you can live without it.

Can you post a picture or two of the end of the cable so we can figure out if it's still usable? If not, it looks like you would end up having to buy a whole new battery, because as near as I can tell it looks like it may be soldered onto the battery so it would only be available with a new battery; I doubt you'd be able to buy it separately.

@dadibrokeit - You do need the cable connected for the system to run, and the cable is available as a spare.