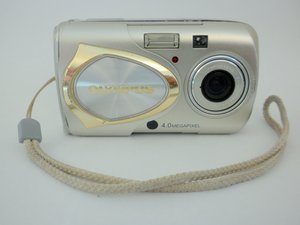 Can I use a 2GB picture card in my camera?

I insert in camera and the light just blinks. Do I need to format? If so how?

I have a 32GB but need more space than 38 pictures.

The very first thing that I find strange is 38 Pictures=32GB? That does sound like am extreme resolution.....

Gayle, I am not sure about your 32GB card, looks like it might be a 32MB card:-) just double check. according to the user manual (you can get it from from here) your camera only supports up to 512MB.

If you change the resolution of your camera, you can fit quite a few pictures on that card. Of course, you can always try a 2GB card :-) but your camera may only recognize 512MB. Hope this helps, good luck.

I'm wondering if your camera's set to video, and if you get 38 video burst segments on your 32 GB (MB?) card, or maybe your resolution IS, set out-a-sight. Is it an older model 32 MB card? Check your manual, to see about resetting it to pictures maybe? I don't have a manual, and the symbols are a mystery.

I have the 512 MB card in mine. My screen reads "Card Error," and it's my fault probably. I use the cord to download, to a computer folder, and I can then divide the download, into appropriate computer folders. I made the mistake of creating a folder, on the XD card in the camera folder, and then deleted it. Hence the card error? Maybe, it messed up the number sequence, or fried the card? I recommend a straight download, and immediate disconnect, to save the camera battery.

I routinely use My Computer to format the card, but don't know if the onboard camera formatter would have gotten better delete results, in my case. You could try reformatting your card, first, in your camera, and then with your computer. My computer now(reads) thinks that the camera, is an optical(CD) disc reader. I think my original error happened on a Linux Ubuntu Operating System computer, and I've had external hard-drives/USB's, read, as optical(CD) disc readers on occasion, and possibly due to power discrepancies. (Making sure your battery is in good shape, and charged up, could be important.) My (external)HD/USB's have all reverted back to normal function. I'll have to fire up the Ubuntu, to see what reaction I get now, with a blank card, that I think I just erased?

I ran a magnet over the card, to see if it would at least reboot in the camera. No luck. But, at least the camera now registers on the computer, and the free multipurpose tool MYDefrag, (that also defragments camera flash memory cards/discs, USB's, thumb drives, Zip drives, floppies, etc.) tells me (hmmm? intermittently) that the card drive is empty, or blank. Maybe I wiped out any programming on the card? (which hadn't shown previously?) It's probably just fried.

Using the computer's Device Manager, I have determined, that my camera's drivers, are optimal, and I presume, still intact, and it recognizes it as an Olympus. Modifying your AutoPlay, and/or Default choices, in Properties, might not change anything, but its an option.

Thanks to Old Turkey03, I won't run out to buy the 2 GB card, if my camera won't support it. Maybe the drugstore/camera shop has a new 512 MB card for me?

I personally prefer the Puran Free de-fragmenter with PIOZR, for my XP computer hard-drive, but use MyDefrag occasionally, to really compact my system disc (hard)drive monthly. I like the Windows de-fragmenter's Analyzer for statistics. I'll use MyDefrag first, and then Puran, which then takes care of the extra fragments, and also shuts down the computer for me. (Mydefrag doesn't leave fragments on a camera/USB/thumb drive, usually, but hard-drives, are active.)