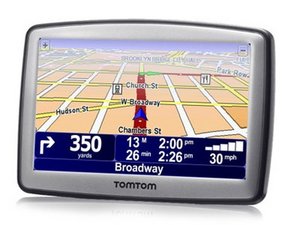 TomTom’s all-in-one GPS navigation devices all include a touch screen, speaker, USB port, and an internal Lithium-ion battery. Most models also include Bluetooth transceivers that allow users to connect their smartphones and allows the device to be used as a speakerphone to make and receive hands-free calls. The TomTom One is the base model for automobile navigation. The only difference between the TomTom One and the TomTom One XL is the side of the touchscreen (the XL has a larger screen).

The TomTom XL includes an EasyPort holder, a car charger, a USB cable, and a documentation package. To turn on the device, press and hold the On/Off button until the start-up screen appears. The device may ask some set-up questions that can be answered by tapping the screen. If the TomTom XL device has not started correctly or stopped responding to taps, check that the battery is properly installed. The battery must be charged in order to work, so connect the device to the car charger; it may take up to two hours to fully charge the device’s battery. Users can also restart the device by pressing and holding the On/Off button for 15 seconds and releasing the button when the device begins to restart.