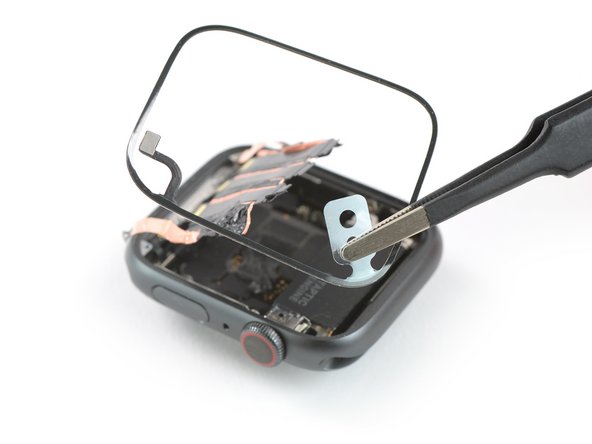 Use this guide to replace the Force Touch gasket in your Apple Watch Series 4.

Make sure to update your Apple Watch to watchOS 5 or later (and the paired iPhone to iOS 12 or later) to avoid pairing issues after a display replacement.

Replacing the display can cause issues with Apple Pay. If possible, to reduce the likelihood of problems, delete all your Apple Pay account info before the replacement, and then re-enter it with the new display installed.

This guide shows the procedure on the standard, GPS-only version of the watch, but the cellular/LTE version is similar.

To reassemble your Apple Watch Series 4 follow these instructions in reverse order to reattach the screen and the battery.

To reassemble your Apple Watch Series 4 follow these instructions in reverse order to reattach the screen and the battery.

Do I have to put also new adhesive or adhesive at the force touch is fine ?

I have an Apple Watch SE 40mm that had a very cracked screen after falling on a tiled floor. Gift from my daughters for father's day, ouch!

Reputable service wanted 140.00 to replace the screen. I got cheap and got a kit on Amazon that had a screen with digitizer. Looked at videos on Apple Watch SE screen replacements on YouTube. Some great, & some bad. Watched over and over again the good ones.

Was able to get the screen off using heat gun. Released the latches and gently removed the three ribbon cables. Removed the adhesive strip that was kind of clear in appearance. Saw a light brown strip in the channel around the base of the watch. Thought it was part of the adhesive and pulled it out. Then I thought, sh*^t, was that the Force Touch Gasket! To make matters even worse the two ribbon cables on each side tore. I think they insulate the signals?? Looks like my beloved SE is toast thanks to me being a bone head! Should have sent it in for 140.00!

Do I need to replace the Force Touch gasket even though it isn‘t used anymore sine WatchOS 7?

I mean while replacing a display glass do I need to keep the Force Touch intact?

Yes because you need to glue and fix the Display. It’s also for the water resistants. :)