How to Apply Custom-cut Battery Adhesive 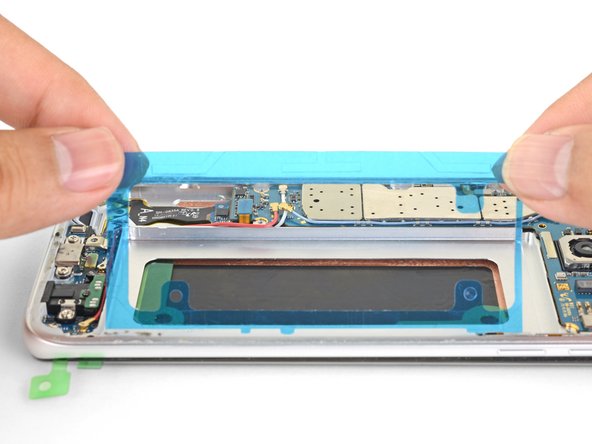 This guide shows how to apply custom-cut battery adhesive when you replace a battery.

If you are using double-sided tape instead, use this guide as a general guideline for where to apply the tape.

Fantastic job on the instructions ! I only wish I was able to find a solution, for removing the original glue from the back cover.

That is all I have left to do, and I have been unsuccessful for 6 to 8 hours of trying to find a way to get it off.

Your best chance is using high concentration (over 90%) isopropyl alcohol . If you can’t get the surface completely clean, that’s alright. Just try to get all large adhesive residue off, so that the battery and new adhesive will lie flat in the battery well.

I accidentally rubbed off some of the black paste thing under the battery when cleaning it for the new battery adhesive strip. Should I be worried??

The black paste is possibly the graphite pad stuck onto the back of the display, which channels heat from the phone to dissipate through the display. There shouldn’t be any damage to your phone!

A big respect & thank you for the instruction to replace the battery. I couldn't be more happier because I did it myself thanks to you & ifixit team. It only took 30 minutes from start to finish. Just waiting on the back glass to arrive other wise excellent job on your side and awesome job to ifixit. I will have to buy higher concentration of isopropyl to wipe those big adhesive before I put the glass.

I’m glad to hear of your success! Keep fixing things!

The Old Battery Connector SNAPS into place. but not the new battery i was sent. Could there be different Connectors??

This is a general guide for battery adhesive, so I can’t tell which phone you’re working on. Which phone are you replacing the battery for?

91% percent isopropyl alcohol removes the residue very well. It is available at the local drug store about 2 dollars for a quart.

Thank you for the excellent, detailed instructions. I was able to replace my OEM battery without any problems. I do have a question related to charging the new battery. Your direction is: For optimal performance, calibrate your newly installed battery: Charge it to 100% and keep charging it for at least 2 more hours. Then use your device until it shuts off due to low battery. Finally, charge it uninterrupted to 100%. The instructions that IFIXIT sent with the kit was to allow it to run down to 10% then charge it to 100%. Is there a big difference here or are both methods okay?

I’m glad you’re able to replace the battery! The proper way to calibrate the battery is to allow the device to run until it shuts off. This allows the battery management hardware to have a point of reference on what 0% is, and potentially reset any counter errors. For more details, check out this page.

oops, forgot to clean off the old adhesive. is that going to be an issue? I already stuck on the new one...

For the most part it should be fine, as long as there weren’t large uneven chunks of adhesive.

I am unable to find adhesive tape for Galaxy s8 Active. Do you have a suggestion on what comparable tape might work on the s8 Active?