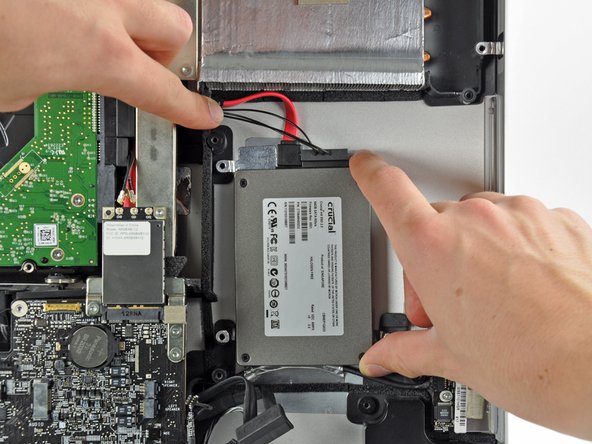 It should be noted to anyone doing this that RAM should be removed first. When you get towards the end things go bad if your RAM is still in there and you start moving the mainboard around.

You are correct. I followed the ifixit guide on youtube and it was not mentioned to remove the RAMs. But in fact the RAMs should be removed in order to pull the logic board.

Seconded ... remove ram first! Spent more time reinstalling main board than anything else.

A curse on Jobs & Apple for making it this tedious to add SSD & HDD.

Did it, my imac is extreamly speedy now with the ssd compared with the origional hdd.

Tool me about two hours to do, had to have my brother help me when i was removing the logic board and screen.

Found that the logic board was extreamly hard to remove.

Good tip is to selotape the cables before removing / inserting the logic board as i traped my microphone connector underneath. Luckely i could reach it with a pair of tweesers.

Over all glad i did it.

Can anybody explain why the PSU module needs to be removed (steps 34-37)? I saw a similar guide elsewhere and it skipped this completely. Is this not required? If so, that might explain why this guide says that to re-assemble do the reverse from step 33 and not 38 as expected!