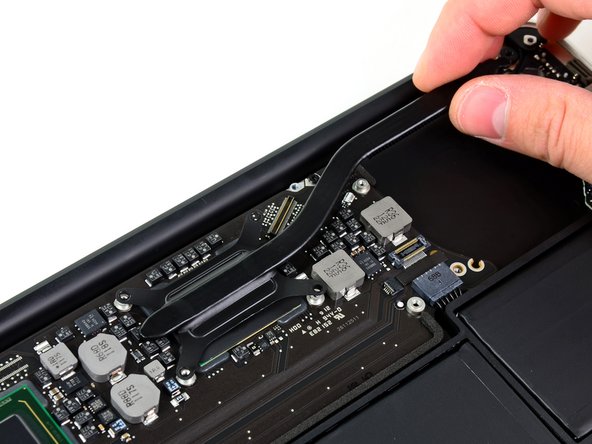 Use this guide to replace a damaged heat sink or to reapply thermal paste.

Great guide. I repasted my Early 2011 15" MBP with the 2.2 QC i7 and my peak load temp is now 87C (it was well over 100, and I was having it shutdown on me sometimes before). Having done this now, I must say I consider this system much more difficult to work inside than HP, Dell, or Lenovo/IBM laptops (having worked on all the others before). If you're patient, take it slow, and are careful though, everything works out. Here's some pictures of parts of the process:

After a thorough cleaning with Articlean

My paste job after a test press, good enough

Macbook Air 2011...a few things are different on my computer than this guide, but everything is straightforward enough. Here are the differences I found.

1. battery plug is slightly different, but same thing you just pull it out with the plastic tab.

2. Need to unplug the wire underneath the fan to reveal the 3rd screw...it isn't where it's shown on the picture here, that's a screw for the logic board not the fan.

3. There is a 5th screw holding the heatsink in place on the right end under another wire that connects to the hinge & screen. Had to move the wire to the side and remove that extra screw to get the heatsink off.

My Macbook Air 2011 shut off and starting making 3 beeps on attempting startup. Read this 3 beeps on start up and thought it may be the heat sink. Haven't applied new paste yet, but the paste is definitely hardened after following this guide. Plan to reapply and hopefully it works again!